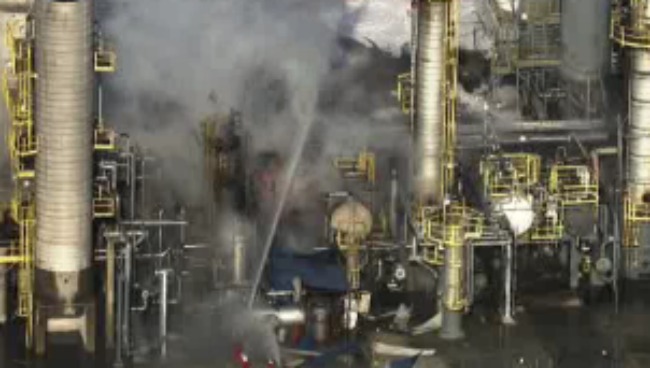 The blast caused a fire at the Blue Island Phenol. Views from the station's helicopter showed several firefighters pouring water on a fire inside a portion of the facility.

So far, the surrounding area had not been evacuated. The Eisenhower High School is located about a half-mile away, but classes were still in session there.

The extent of the injuries were not immediately known, but the two people, believed to be workers at the plant, suffered burns and were transferred to a nearby hospital, according to Mayor Domingo Vargas, from nearby Blue Island, Ill.

The plant manufactures acetone and phenol, an ingredient used to manufacture certain herbicides, cosmetics and pharmaceuticals.

In 2008, the company reached an agreement with the Illinois Attorney General’s office following a fire at the facility, according to a statement from the AG’s office at the time.

Under that agreement, the company agreed to hire a licensed engineering firm to analyze the cause of the accident and make needed repairs before it could resume production. The company also was required to assess soil and groundwater contamination caused by the runoff of water used to extinguish the fire.

The company said the fire erupted after a storm caused a power outage at the plant. Without power, cooling and circulation systems in the phenol unit failed, causing the temperature and pressure inside the phenol unit’s oxidizers to rise, starting a chemical fire.