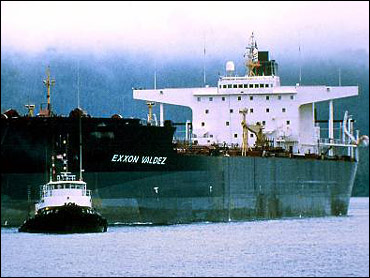 A federal appeals court on Friday cut in half a $5 billion jury award for punitive damages against Exxon Mobil Corp. in the 1989 Valdez oil spill that smeared black goo across roughly 1,500 miles of Alaskan coastline.

The case, one of the nation's longest-running, non-criminal legal disputes, stems from a 1994 decision by an Anchorage jury to award the punitive damages to 34,000 fishermen and other Alaskans. Their property and livelihoods were harmed when the Valdez oil tanker struck a charted reef, spilled 11 million gallons of crude oil.

It's the third time the 9th U.S. Circuit Court of Appeals court ordered the Anchorage court to reduce the $5 billion award, the nation's largest at the time, saying it was unconstitutionally excessive in light of U.S. Supreme Court precedent.

This time, in its 2-1 decision, the court ordered a specific amount in damages, while its previous rulings demanded a lower court to come up with its own figures.

"It is time for this protracted litigation to end," Chief Judge Mary Schroeder and Judge Andrew Kleinfeld wrote.

Holland, appointed by President Reagan in 1984, declared Exxon's conduct "reprehensible" and set the figure at $4.5 billion plus interest, ruling that the Supreme Court's precedent did not directly apply to the case.

Exxon again appealed, and argued that it should have to pay no more than $25 million in punitive damages, which are meant to punish a company for misconduct.

The company, whose $36.1 billion in earnings last year were the highest ever by any U.S. corporation, said it has spent more than $3 billion to settle federal and state lawsuits and to clean the Prince William Sound area. The company earned about $5 billion when the spill occurred.

In October, Exxon Mobil reported earnings of $10.49 billion in the third quarter, the second-largest quarterly profit ever recorded by a publicly traded U.S. company.

David Oesting, the lead lawyer from Anchorage representing the plaintiffs, said he was considering whether to ask the court to rehear the case with 15 judges or to go to the U.S. Supreme Court.

"Exxon could decide to continue grappling with us, and we can decide we want to reach for more," Oesting said. "And, of course, what one does depends on what the other does."

In 1994, a federal jury found recklessness by Exxon and the captain of the Valdez, Joseph Hazelwood, who caused the tanker to run aground. That finding of malfeasance made Exxon liable for punitive damages.

The disaster, the worst oil spill in U.S. history, prompted Congress in 1990 to pass a law banning single-hulled tankers like the Valdez from domestic waters by 2015.

Frank Mullen, board member of United Cook Inlet Drift Association, which represents a fleet of 600 Alaskan salmon gillnetters, said many of the plaintiffs in the case want it to end. "Exxon wins on this one because they've literally worn people out and I think most people just want to get this over with."

The plaintiffs alleged Hazelwood ran the ship into a reef while drunk, and that Exxon knew he had a drinking problem but left him in command of tankers.

The court majority said Exxon should pay punitive damages that equal five times the amount of general damages the jury awarded in addition to the more than $200 million the oil giant paid to Alaska natives, fish processors and other businesses and fishing interests. That equals $2.5 billion.

The majority said it could have demanded a higher payment, but Exxon took prompt action to clean up the mess and to compensate victims.

"These mollify, at least to some degree, the reprehensibility in economic terms of Exxon's original misconduct," the court ruled.

In dissent, Judge James Browning ruled that $5 billion verdict should remain intact, writing there "is no principled means by which this award should be reduced."