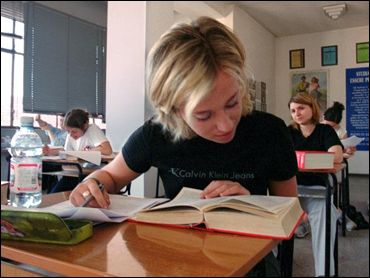 Many high school seniors are flunking when it comes to financial literacy. Their knowledge about money management, investing and saving has gone from bad to worse, a national survey suggests.

In a 45-minute multiple choice examination administered in December, January and February, 4,024 soon-to-graduate high school seniors on average answered correctly only 50.2 percent of the 31 questions about personal finance and economics. That's a failing grade based on the typical high-school grading scale.

Improving financial literacy among young people is particularly crucial given the ever-expanding financial choices facing consumers, says Federal Reserve Chairman Alan Greenspan. It also might prevent them from making poor financial decisions later in life that could take years to overcome, he says.

Greenspan, who learned as a youngster to work percentages by keeping up with baseball batting averages, has said schools should teach basic financial concepts better in elementary and secondary schools. A good foundation in math would also help students to become more financially literate, he says.

All three surveys were sponsored by the Jump$tart Coalition for Personal Financial Literacy, a nonprofit group that wants students to have the skills to be financially competent. Lewis Mandell, professor of finance and managerial economics at the University of Buffalo School of Management, conducted the surveys.

The latest were being released Tuesday by the Federal Reserve. A copy was obtained by The Associated Press.

Lynn Reaser, chief economist at Banc of America Capital Management, said the drop in financial literacy scores since 1997 might be related to the slide in the once high-flying stock market.

"All of the euphoria in the market may have induced young people to take some interest in understanding money matters, but much of that interest probably subsided when the market went into a major downturn," Reaser said.

In the survey, 69.3 percent said they would have no liability if their credit cards was stolen and a thief ran up a $1,000 bill. (Liability is limited to $50 after the credit-card issuer is notified.) Only 7.7 percent knew they would be responsible to pay $50. Two years ago, 14.5 percent answered the question right.

Approximately, 35.1 percent knew that retirement income paid by a company is called a pension, but 33.3 percent thought it was called Social Security. Two years ago, 46 percent answered correctly.

Some other results in the current survey: