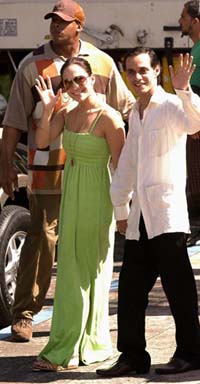 Now that UCLA has won yet another Los Angeles city championship, the Bruins can focus their full attention on the national picture.

"He's going to be one of the greatest," senior safety Larry Atkins said.

"I just wanted to come out here and contribute a little bit," Foster said."I think I did that today."

Foster did more than just contribute, despite being under the weather.

"DeShaun was running just unbelievably," UCLA quarterback Cade McNown said. "He was shaking off tacklers, he was running inspired. "

"He just goes out and runs. He doesn't know much more than where to run on certain plays. I'm sure he'll understand more as he gets older. He played a magnificent game."

The victory was UCLA's eighth consecutive over the Trojans, by far the longest in the 68-game crosstown series that began in 1929. It extended the Bruins' school-record winning streak to 20 games, longest in the country.

The Trojans (7-4, 5-3) hurt themselves by losing four fumbles in the first 22 1/2 minutes, severely damaging their momentum as well as directly leading to 13 UCLA points.

USC had seven turnovers to three for the Bruins.

"When we can force that many turnovers, we're going to be in a position to win a lot of football games," McNown said. "Anybody that watched the game obviously saw the heart we played with."

Hackett admitted the Trojans weren't at their best.

"Every time we tried to get something going, we either had a penalty or turned the ball over," he said. "Anytime you play a team of UCLA's caliber, you can't turn the ball over, which is what we did on every play."

Or so it must have seemed.

UCLA spotted the Trojans a 3-0 lead on a 36-yard field goal by Adam Abrams before Foster got started.

First, he caught a 4-yard touchdown pass from McNown to cap a 77-yard drive and put the Bruins ahead for good.

USC freshman Carson Palmer threw a 4-yard touchdown pass to Antoine Harris early in the second period, two plays after Chris Claiborne's 66-yard interception return to the UCLA 4. But Foster scored on a 65-yard run two plays after that.

Chris Sailer kicked field goals of 38 yards and 26 yards later in the second quarter after UCLA recovered a pair of USC fumbles to make it 27-10.

USC's Petros Papadakis scored on a 1-yard run midway through the third period to trim UCLA's lead to 10 points. That would be as close as the Trojans would get.

The Bruins didn't record a first down in three third-quarter possessions, but started the fourth quarter at the USC 31-yard line after an 8-yard punt return by Ryan Roques.

Foster, had a chance to score a fifth touchdown, but fumbled while trying to go in from the 1 with 3:51 left.

McNown, a Heisman Trophy contender who has quarterbacked UCLA to four victories over USC, wasn't up to form statistically, completing 12 of 20 passes for 146 yards with two interceptions.

Palmer was 28-for-43 for 252 yards with two interceptions. USC's Chad Morton was the game's leading rusher with 120 yards on 19 carries.

"We expected to play a lot better than we did," Palmer said. "We weren't using our heads. You just can't do that (commit seven turnovers) and expect to win the game. I just can't wait until next year."