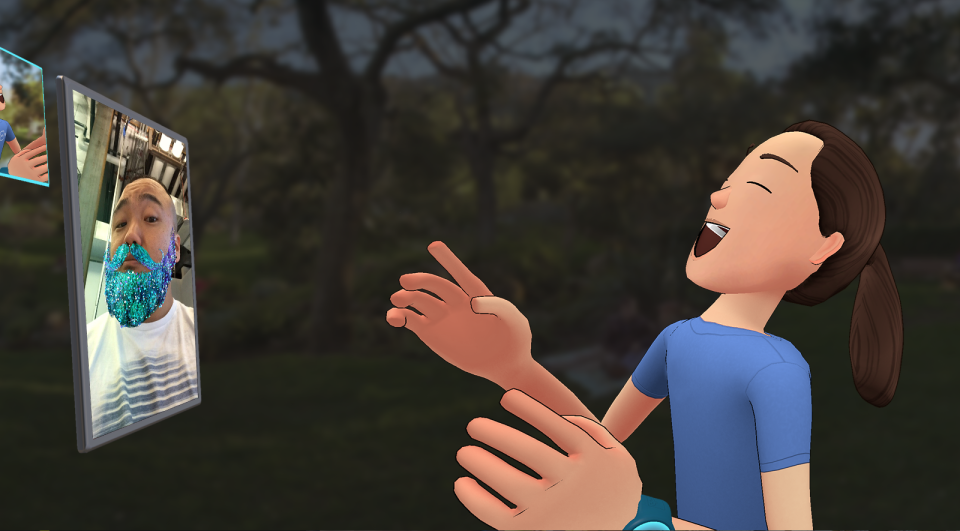 On Tuesday, we saw the future of virtual reality on Facebook. They’re calling it Facebook Spaces, and it shouldn’t be a surprise that it’s all about hanging out with your Facebook friends -- in virtual reality.

It’ll start with an avatar that you can customize to look just like you, and from there you can invite other Facebook friends to hang out in Spaces, or you can call them with Facebook messenger and invite them into a VR chat. Together, you can look at Facebook 360 video, draw and hold different objects and show off pictures in a virtual reality slide show.

“This is the easiest it’s ever been to bring the real you into VR,” said Rachel Franklin, head of social VR at Facebook.

Franklin announced the platform at Facebook’s annual developer conference, F8, on Tuesday. The platform, which is in beta, is now open to software developers so they can build on what Facebook has started.

Franklin pointed out that people find the experience of VR to be very real. If your avatar takes a selfie, you tend to smile in real life, too, for example.

“It’s still you in VR,” said Rachel Franklin, head of social VR at Facebook. “You’re connecting with others in a more immersive way.”

Facebook has made significant investment in VR, including its $2 billion purchase of virtual reality technology Oculus Rift in 2014. In October, Facebook CEO Mark Zuckerberg announced a $250 million investment in VR, bringing the company’s total contribution to the effort to $500 million.

The future of Oculus Rift seemed a bit wobbly last year when founder Palmer Luckey got into hot water for his political stances. Luckey has since left Facebook. What’s more, Facebook cut the price of the Oculus Rift headset in March after scaling back the availability of demos of the hardware in Best Buy stores.

With a focus on the Facebook Spaces platform, the company will have a shot at creating a bigger market for VR headsets like Oculus by giving the technology a much bigger user base.

“It’s sort of like a magical canvas for shared spaces,” Franklin said.