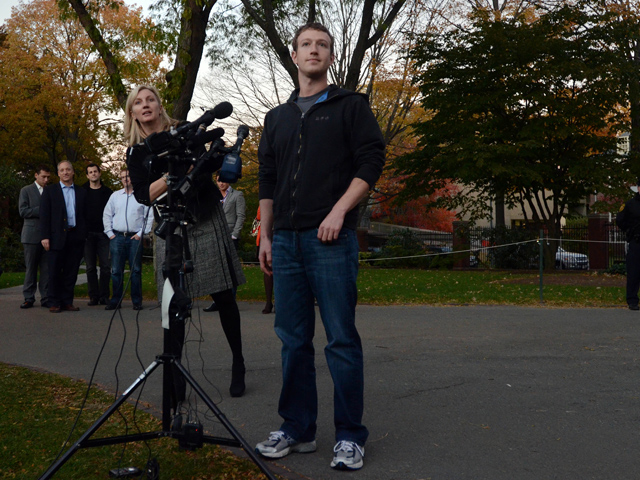 (AP) NEW YORK - Facebook's (FB) stock is up following a disclosure that its CEO, Mark Zuckerberg, won't sell stock in the company for at least a year.

Zuckerberg holds about 504 million shares and options and had been eligible to start selling them in November. The company currently has about 692 million shares eligible for sale. The concern is that if Zuckerberg floods the market with additional shares, prices would go down further.

The stock is still trading at less than half of the $38 that it went for in Facebook's May initial public offering. It gained 78 cents, or 4.4 percent, to $18.51 in midday trading Wednesday. That more than wiped out Tuesday's loss, during which the stock hit an all-time low of $17.55. It closed at $17.73.

Since the IPO through Tuesday, Facebook's stock has been down on 45 trading days, up on 28 and unchanged on two.

Facebook revealed Zuckerberg's commitment in a regulatory filing late Tuesday. It also said that two of its board members, Marc Andreessen and Donald Graham, have no "present intention" to sell stock beyond what they need to cover taxes.

Even without Zuckerberg's share, up to 1.2 billion more shares could enter the market over the next several months, including those from employees eligible to sell on Oct. 29.

Investors have been concerned about Facebook's ability to keep increasing revenue and make money from its growing mobile audience.

On Tuesday, Morgan Stanley analyst Scott Devitt cut his target price on the stock to $32 from $38, saying that its mobile advertising revenue is just starting to grow. Morgan Stanley led Facebook's IPO. Devitt still has an "Overweight," or "Buy," rating on Facebook stock.

Doug Anmuth, an analyst at JPMorgan, which was another large underwriter of the offering, also cut his target price on Tuesday, to $30 from $45. He kept an "Overweight" rating as well.

The company, along with the investment banks that led the IPO, is the subject of dozens of shareholder lawsuits. They allege that analysts at the large underwriting investment banks cut their financial forecasts for Facebook just before the IPO and told only a handful of clients. Facebook and the banks overseeing the IPO insist that nothing about its IPO process was illegal or even out of the ordinary.