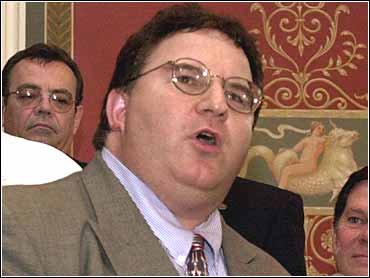 John DiIulio, who heads up the White House effort to get federal funding for faith-based social programs, is stepping down, a White House official said on Friday.

White House spokeswoman Claire Buchan said DiIulio, a professor from the University of Pennsylvania, had originally said he would only stay in the position as director of the White House Office of Faith-Based and Community Initiatives for six months.

"He's made his decision consistent with what he always planned to do," she said.

DiIulio had a frustrating tenure, reports CBS News Correspondent Bob Fuss, trying to push through President Bush's faith-based initiative and making a lot of enemies along the way. He alienated Democrats who feared he would subsidize religion and some conservatives worried the government would interfere with religious organizations if they were given money.

DiIulio was not immediately available to comment. Buchan said she did not know what date he planned to leave.

DiIulio, a devout Roman Catholic, was charged with developing a formal plan to funnel federal money to religious charities that ran social programs.

DiIulio complained that critics were focusing on the extreme cases and ignoring the good work that religious people can accomplish. And he hit back directly at the conservative, evangelical critics, saying they do not speak for the entire religious community. "Predominantly white, exurban, evangelical and national parachurch leaders, should be careful not to presume to speak for any persons other than themselves and their own churches," he said in March.

He is leaving at a critical time for the initiative.

DiIulio helped push legislation opening 10 government programs to religious groups through the House, but the measure faces a tougher time in the Senate. So far, no Democrat has been willing to sponsor the legislation, though Sen. Joe Lieberman, D-Conn., is working on a bill.

DiIulio, 43, will be the first high-profile Bush appointee to leave the administration. His job pays $140,000 per year.