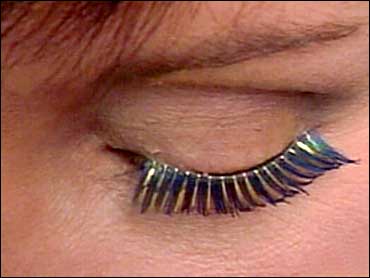 Forget everything you think you know about fake lashes, because the newest incarnations are so natural and easy to apply, you'll be more glamorous in the blink of an eye, according to The Early Show correspondent Melinda Murphy.

Madonna wears them. And Oprah has some made out of mink.

Celebrated makeup artist Vincent Longo says, "Lashes are definitely very hip now, because it's a very easy way to do your makeup, and truly look glamorous, and keep it playful without getting too serious."

Longo should know. After all, points out Murphy, he has his own makeup line, and his clients include enough stars to fill a galaxy.

"On the runway shows, we definitely use them." Longo says. "With the celebrities, if it's an evening out and it is a little more glamorous and it is the red carpet, we'll definitely go there with the false lashes."

Trendsetter Jennifer Lopez even had some custom-made out of red fox for the Academy Awards.

"(False) eyelashes were first invented in 1919 by a makeup artist named Max Factor," notes "Allure" magazine Editor in Chief Linda Wells. "He made them out of human hair for a starlet and they became a standard in Hollywood."

Wells says having lashes applied is like getting a new hairdo: "Everyday women are starting to wear them. …It's inexpensive, it's something that women can do easily and it's fun at night. …I think we're going to see more of these popping up across the country and women will drop in and get this done, the way women get their hair blown out for an evening. And that used to be something no one did. And I think it's going to be a big thing."

It already is at places such as Shu Uemura in New York City, where General Manager Chris Salgardo says, "We've seen sales of lashes rise 80 percent since June. …(Women are) following the trends. They're seeing it all over the publications. It's in every magazine. It's on the runways. So there's definitely this curiosity about lashes."

So much so, that Shu Uemura even has a "lash bar," and on a recent Tuesday afternoon, the joint was hopping, Murphy reports.

Customer Lily McIlvaney says, "They're dramatic, but not quite Liza Minelli. So you're making a statement, but not over the top."

J.P. McCary, a Shu Uemura lash stylist, points out that, "Curling your lashes makes them the biggest difference before you put on fake lashes. It's one thing to remember."

Another? Put on mascara before and after you put on the lashes.