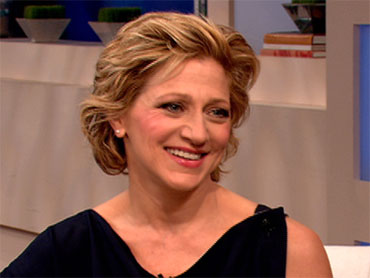 Falco said on "The Early Show" she has a role many actors are looking for.

She said, "You hope you get to do something like this, where you get to be dimensional and hopefully play stuff you haven't played before. So I consider myself very lucky."

Falco said television seems to be moving toward characters that have layered or flawed personalities.

"I think people may be tired of seeing the sort of cookie-cutter versions of what people should be and, in fact, they prefer to see people that look more familiar such as themselves or people they know," she said. "Give people a chance to feel like you don't have to be perfect."

"Early Show" co-anchor Maggie Rodriguez noted Falco's own battle with alcoholism. Can the star draw on that experience for her current role?

Falco responded, "I think addiction is a very specific physiological mindset. So it certainly does help to have some background with that. Because if you explain it to a non-addict -- that you're pulled to something that's so bad for you -- it doesn't make sense. But to me, it makes perfect sense."

As for the second season of "Nurse Jackie," Falco says her character's not ready to "cash it all in."

She said, "She's still got to create a little more chaos. She's still trying to make it work for her."

Rodriguez pointed out that it was amazing how, in the first season of the show, how Falco's character got away with so many secrets.

"That's addiction for you," Falco said. "Really some of the most wiley, resourceful individuals you'll meet."

"But eventually it has to catch up," Rodriguez added.

"It does," Falco said. "Either it catches up with you or you you die from it. So hopefully she'll get her life together."

"I don't think it's relevant," she said. "I think we're not saying, 'This is what nurses are like.' We're saying it's what this woman was like. And I think if she was a plumber, she'd be dealing with this problem. She just happens to have easier access."

Falco, who brings her two children, ages 5 and 2, to the set of "Nurse Jackie." She said her children don't understand the show or their mom's job.
"They play with the wardrobe stuff and people get them cookies. I don't think they have any idea why my face is on a poster," she said. "...They seem to be okay with it."

Rodriguez also pointed out some "Sopranos" gossip about the possibility of an upcoming film. Falco said she hasn't heard anything about it, but that she's always the last to know. However, she said she wouldn't be averse to doing a "Sopranos" movie.

She said, "I miss my friends a great deal, so, yeah, I would do it in a heartbeat."

The Sopranos were recently named among the top five TV families by TV Guide magazine. When Falco learned of the honor, she rolled her eyes and said, "I think that this country's in terrible trouble."