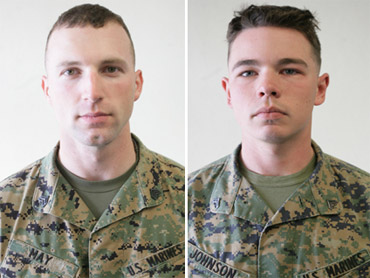 The Vietnamese say that every bullet that kills a soldier first passes through his mother's heart.

I was reminded of that phrase this week when I received a phone call from Karen May, the mother of Sergeant Kenneth May, from Kilgore Texas.

Sgt. May was one of two Marines from 3/1 battalion who was killed on May 11th by an IED explosion in southern Helmand province in Afghanistan. The other man who died was Corporal Jeffrey Johnson.

My producer/cameraman and I happened to be staying at the same base as Sgt. May and Cpl. Johnson, and we filmed the aftermath of the explosion.

Understandably tensions were high at the scene of the explosion. Initially some of the Marines were not entirely comfortable with having a television crew there, but we kept a respectful distance and in the end the Marines understood we were not trying to sensationalize nor intrude on the somber scene. But in our minds we had even greater concerns about how the families of the two fallen Marines would react to having footage of the aftermath of the explosion shown on national television.

When I got back to the U.S. last month, I got in touch with the May family directly - Sgt. May's wife Krystal, who in turn talked to his parents, Ken and Karen.

I also contacted a Casualty Assistance Calls Officer (CACO) who was assigned to the Johnson family, and asked both families how they felt about having the stories of the two Marines told on television. Both families readily gave their assent, and even said we were free to use their pictures. I cannot presume to know all that went through the minds of the Mays and the Johnsons, but my sense is that neither family wanted the sacrifice of the two young men to be forgotten or passed over. That is why we call it Memorial Day, after all.

Our story on the incident ran earlier this week on CBS Evening News, and Karen May's call came just minutes after the broadcast. Her voice was choked up. She said it had been emotionally difficult for her to watch the story, but she said she was very thankful that her son's story was told. Krystal May had told me earlier that day that she was confident that the story would honor her husband's name. The Johnson family had similarly said they were open to full media coverage of their son's death.

Marines in the field are expected to be brave. It is what distinguishes their service. But I am humbled by the courage of the families back home, particularly those like the Mays and the Johnsons who have to mourn a loved one who didn't make it back. In some ways those invisible bullets are the hardest ones to endure.