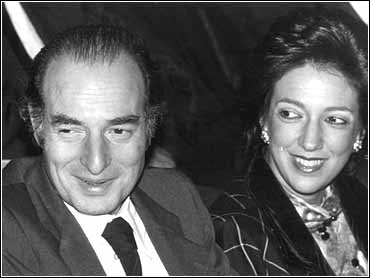 In January, before former President Clinton pardoned Rich and Pincus Green, each made an explicit pledge to donate $500,000 a year to a cancer charity run by Rich's former wife, Denise Rich, lawyers familiar with the arrangement told The Times.

The combined donations would have been the largest ever received by the G&P Charitable Foundation, founded in 1997 to honor the memory of their daughter, Gabrielle Rich, who died of leukemia when she was 27.

Denise Rich. a generous Democratic donor, personally lobbied Mr. Clinton to pardon her ex-husband, which Mr. Clinton did on the day he left office in January. The Times reported that Denise Rich had initially been reluctant to lobby for her former husband's pardon because of the couple's bitter divorce.

She has described her change of heart on the pardon as a bid to help her two daughters, who have seen little of their father since he fled to Switzerland in 1983 to escape prosecution on federal charges of tax fraud, racketeering and trading with the enemy.

People close to Denise Rich said she didn't pressure her ex-husband for the pledge money.

"She never conditioned her support of the pardon on her receiving anything from Marc Rich," one person close to her told The Times. "She wanted to help the father of their children."

Lawyers for Marc Rich and the foundation declined to comment to The Times. Mr. Green could not be reached by the newspaper.

Federal prosecutors are now investigating whether any laws were broken in the pardons granted to Rich and Green. Denise Rich has agreed to cooperate under a grant of immunity.

(c) MMI Viacom Internet Services Inc. All Rights Reserved. This material may not be published, broadcast, rewritten, or redistributed. The Associated Press contributed to this report