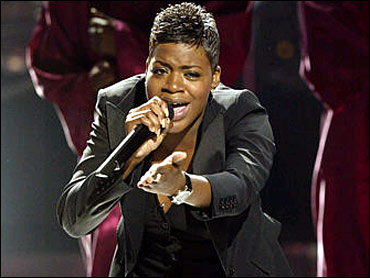 Fantasia Barrino's fantasy of pop stardom became a reality Wednesday night when she was named the winner of "American Idol."

Barrino grabbed runner-up Diana DeGarmo in a bear hug and twisted her around as tears streamed down her face.

Then she added: "I been through some things but I worked hard to get to where I'm at."

DeGarmo continued smiling through tears of defeat: "I'm so proud to have come here with Fantasia. She's my girl, and you guys will treat her well."

Just moments after her big win, Barrino told Bob Goen, host of "Entertainment Tonight" that there were people back home who said she could not make it because of Zion, her daughter.

"I said, 'You know what? I'm going for it anyway,'" Barrino said. "I just want people to see that I'm a strong mom and a good mommy, and I'm going to work hard just so she can have the best. I want my child to have things I didn't have."

She noted many young mothers believe they can't follow their dreams just because others say they can't.

"Just because I have a child doesn't mean life is over," Barrino said. "My dream has always been to do this and to have my child travel with me. Maybe I can get a bus and put some toys in the back of the bus or something. I don't know. I'm excited, though."

Barrino moved everyone to tears singing her single "I Believe," but then it was her turn to cry , when she got a special surprise, two special gifts designed by judge Paula Abdul.

Showing the pendant in a necklace to Barrino, Abdul said," It's a nugget and has a diamond in it. And it says: 'No Stone Unturned' to find a diamond in the rough, and that's who you are."

Then showing the pendant in a bracelet she said, "This is a certified flawless diamond. It simply says flawless and that's what your performance was, and that's who you are."

Emotional, Barrino said, "I've never had gold or platinum. I always went to Claire's and got the look alike!"

Judge Simon Cowell had this piece of advice for her, "Don't follow the herd. Let them follow you."

Barrino's final words to Goen, with tears streaming down her face, were "Now I can take care of my child." She was quite humbled by being chosen an "American Idol," not over-whelmed but deeply touched.

The judges of the Fox TV singing contest had pretty much crowned Barrino the winner the previous night, when she dazzled them with a powerful version of Gershwin's "Summertime" and two other songs.

But judges don't pick the winner - America does, through phone and text-message votes. Host Ryan Seacrest said a record 65 million phone votes were cast, up from 24 million for last season's finale.

Barrino receives a recording contract, following in the footsteps of the first two winners, Kelly Clarkson and Ruben Studdard. Her first single will be a song she and DeGarmo both tried out Tuesday night: "I Believe," written by Tamyra Gray, a contestant from season one.

"Both of you have done an amazing job," judge Paula Abdul said before the results were announced. "You've made all three of us extremely proud."

To fill the two-hour broadcast before the results were announced at the Kodak Theatre in Los Angeles, Clarkson and Studdard sang "The Impossible Dream" with Barrino and DeGarmo, and the two finalists did a feel-good version of the George Michael and Aretha Franklin duet, "I Knew You Were Waiting (For Me)."

Several other "Idol" finalists performed on an outdoor stage in the sunshine, including La Toya London, considered one of the strongest singers all along and a favorite to reach the final two, and Jasmine Trias, who stayed in the contest longer than many thought she should - thanks to a sunny personality and help from her home state of Hawaii.

All 12 finalists will go on tour together this summer, something they practiced for Wednesday with a lengthy medley of the series' previous songs.

The "American Idol" finale may seem like the Super Bowl of karaoke, but this year it truly reached the level of momentous sporting-event proportions. Thousands gathered at the Greensboro Coliseum in Greensboro, N.C., to cheer for Barrino and at the Georgia Dome in Atlanta to support DeGarmo.

Gray, from the competition's first season, sang "The Star-Spangled Banner," and the governors of both states had side bets: Georgia had to send peaches to North Carolina if Barrino won, and North Carolina had to send blueberries to Georgia if DeGarmo won.

Hometown pride aside, typically acerbic judge Simon Cowell summed up what the whole contest was about:

Teen dies after being shot by classmate at Arkansas high school