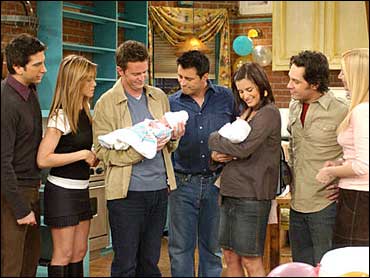 All together now: a national sigh. Ross and Rachel, together again as "Friends" fades to black.

Television's most popular comedy provided the ending most of its fans were hoping for on Thursday, with the on-again, off-again couple declaring their undying love and the gang heading out for one last cup of java.

"It was really emotional," said Matthew Perry, who watched the finale with the other five cast members. "I pride myself on being a real man, but I shed a few tears."

The hour-long episode marked the end of 10 years for the sitcom, which followed six New York buddies as they moved from post-adolescence to something approaching adulthood. NBC privately predicted some 45 million viewers.

Monica and Chandler were surprised by twins and prepared for their move to the suburbs. Phoebe was already married, and Joey is headed west to get serious about his acting career (and star in an NBC spinoff starting in the fall).

Thursday's suspense involved Rachel's plan to take a job in Paris and whether Ross would try to stop her. The couple's tortured romantic past included a quickie Las Vegas wedding and a baby, born during last May's season finale and seldom seen since.

First, Ross couldn't say how he felt. Then he went to the wrong airport. Then Rachel rebuffed him, and finally had trouble getting off the plane. But did anyone doubt they'd be together in the end?

In the final scene, the six friends gave up their key to Monica and Chandler's apartment.

"This is harder than I thought it was going to be," Monica said, before the six friends left for one last cup of coffee - babies in tow.

In New York, the final episode was beamed on a big screen in Times Square, and some 3,000 people sat on blankets and watched in a park overlooking the Hudson River in Tribeca.

"I'm a New Yorker, so I understand the whole lifestyle," said 33-year-old Joann Joseph. "I find it funny. I love how they all have different personalities, but they all come together."

The "Friends" finale was likely to be the second most-watched TV show of the year, behind the Super Bowl, which had almost 90 million viewers.

The number NBC likes best is $2 million, which advertisers were paying for a 30-second commercial on the final "Friends."

It's also the end of an era for TV comedy. With "Frasier" finishing next week, HBO's "Sex and the City" gone and CBS' "Everybody Loves Raymond" expected to end next year, television is losing some of its best and most popular comedies with little to replace them.

Not everyone was a fan, with critics noting the incongruities of a New York setting with few ethnic minorities and struggling 20-somethings who could afford huge apartments.

But it's a franchise NBC will surely miss. Its spinoff starring LeBlanc's character, Joey Tribbiani, will take the mother ship's Thursday time slot next fall.

The network has hardly been shy promoting the "Friends" finale. It was the subject of a two-hour "Dateline NBC" on Wednesday, another one Friday and a one-hour preamble of old clips Thursday. Jay Leno filmed Thursday's "Tonight" show from the "Friends" set.

Unlike when the cast of "Cheers" was on "Tonight" 11 years ago, everyone from "Friends" appeared sober. The one big change: Kudrow's now a brunette.

"It was overwhelming, it was fulfilling, it was satisfying, funny and sad," LeBlanc told Leno. "It was too much to process."

Not everyone was heartbroken to see it go, especially with the show's omnipresence during the past few weeks.

"Can I tell you something honestly?" Jon Stewart said on Comedy Central's "The Daily Show" on Thursday. "I never watched that show - and I'm sick of it."

By David Bauder and Christy Lemire