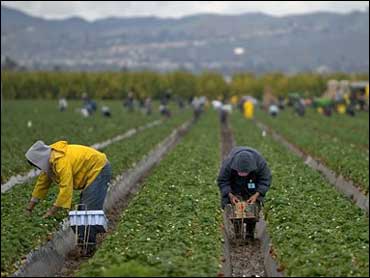 This column was written by Allen B. Riddell.

On September 16, 2004, 8,000 migrant Mexican farmworkers won the largest union contract in North Carolina and the first in the nation to cover non-U.S. agricultural workers. Hailed as a model of organizing in a region with a history of hostility toward unions, the agreement won farmworkers recourse against employer intimidation and abuse, unsafe working conditions, and quasi-criminal recruiting practices in Mexico.

It has been nearly two years since the contract was signed between the Ohio-based Farm Labor Organizing Committee (FLOC) and the North Carolina Growers Association (NCGA). Of the 1,000 farms the association represents, close to half have left. As a result, the number of workers bringing in the growers' sweet potato, cucumber, and tobacco crops this summer has thinned dramatically, leading some to question whether the union can last.

That there is a union contract at all is exceptional. Never had farmworkers organized in this number in North Carolina, a state with the second-lowest rate of unionization — only 2.9 percent of the work force are union members. And these farmworkers had none of the benefits of citizenship or residence; all were brought into the United States for a maximum of 10 months through a federal agricultural "guest-worker" program, known by the temporary visa it grants, H-2A.

"It's significant because of our history of slavery tied to agriculture," says Melinda Wiggins, executive director of the Durham-based Student Action with Farmworkers, an organization involved in the farmworkers' campaign since the 1990s. "It's amazing that this group of Mexican workers have the largest union contract in North Carolina."

Many of the farmworkers have been coming to the same fields year after year to take in the harvest of sweet potatoes, tobacco, and cucumbers. These workers depend on their employer for their visa; they can be fired and sent back at a moment's notice. "There's often not access to field sanitation. Workers may not be provided breaks, and they may be fearful of asking for breaks if the slowest workers are continuously being fired and sent back," said Lori Elmer, an attorney with the farm worker unit of Legal Aid of North Carolina.

Prior to the agreement, if workers challenged their conditions, they could lose more than their job that summer. Many found that they had been blacklisted, barred from returning in future seasons, says Elmer.

Citing the power imbalance, the AFL-CIO, of which FLOC is a member, has taken a position against all guest-worker programs. "Guest-worker programs are a bad idea and harm all workers," AFL-CIO President John Sweeney said in March. "They cast workers into a perennial second-class status and unfairly put their fates into their employers' hands." But even as it seeks to end the H-2A program, the federation is careful to praise the progress of FLOC, one of its rising stars, has made in the fields of the rural South.

First among the protections the contract provides is the grievance process, says FLOC President Baldemar Velasquez. "It's the daily violations of people's rights that makes life traumatic in the fields," he said.

The contract also protects of workers during the recruiting process in Mexico. Even before arriving on a farm, workers had to contend with bribery and graft by recruiters. "We found that people were getting ripped off for $500 to $2,000," says Velasquez. Now the union is able to monitor point-of-hire conditions from an office in Monterrey, located near the U.S. consulate where visas are issued.

In early March, standing in front of a group of workers and family members at a meeting to plan for a Charlotte immigration-reform rally in Dudley, North Carolina, Velasquez said, "They told me I was crazy to try to organize here." He was flanked by organizers, underneath the union's red and black banner and the slogan "Hasta la Victoria."

But after organizing pickle workers in the Midwest in the 80s, union leaders realized that as prices for cucumbers went up, buyers would start looking to the fields surrounding Dudley.

"These companies started buying from North Carolina because the cost of labor was cheaper here," Velasquez explained.

So the FLOC went south.

More than a decade after arriving, union workers had signed a contract with the growers and an agreement with the Mount Olive Pickle Co., which buys cucumbers from many of the farms. In this way, the company ended a five-year nationwide boycott that had won the support of the many organizations, including the United Methodist Church, and had taken the company's products off grocery store shelves in the Midwest.

Velasquez concedes the number of farmworkers brought in annually has declined since the agreement was signed — from 8,000 to around 5,500, he says. He attributes the decline to a federal tobacco buyout that shuttered many farms and an initial flight by growers who knew they would be paying more for visa processing and transportation to and from Mexico. Since then only a handful have left because of dissatisfaction with the union, he said.

Meanwhile, many of the state's farms have turned to the expanding undocumented population — 390,000 today in North Carolina, 16 times the number in 1990, according to the Pew Hispanic Center. And there is a financial incentive to do so: While workers in the H-2A program are guaranteed $8.51 per hour, undocumented farm laborers typically earn the minimum wage, $5.15 an hour.

For growers who wanted to stay above the law, the NCGA was, until recently, the only source of legal migrant labor in the state. Now competing labor suppliers from neighboring states are setting up shop in North Carolina and offering non-union H-2A workers. There are also overseas suppliers of temporary workers. "In the last five years we've started to see farmworkers from Vietnam, Laos, and Thailand," Elmer says.

With the help of the union, though, all workers have a chance at better working conditions. "We're teaching people to deal with the alien in your midst like your native born," said Velasquez, speaking before the audience as workers' children ran around near his feet. "We're making North Carolina whole."

Allen B. Riddellis a Durham-based writer and a former union organizer.

By Allen B. Riddell
Reprinted with permission from The American Prospect, 5 Broad Street, Boston, MA 02109. All rights reserved