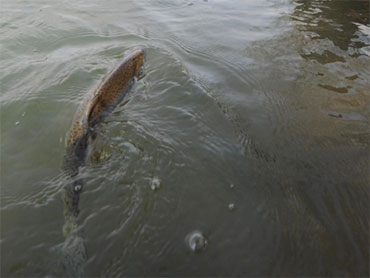 Haywood County deputies are looking for someone who stole 600 pounds of fish from a Canton trout farm.

The Asheville Citizen-Times reported Saturday that the theft was discovered Thursday when Sunburst Trout Farm owner Sally Eason and her husband went to harvest one of their ponds and found almost no fish.

Eason says the thieves baited the water to get the fish to the surface and scooped them out of the water and into some sort of get-away vehicle. She says the locked facility showed no signs of a break-in.

Eason says she called local fish markets, asking to be contacted if someone tries to sell a large amount of fish.

She said her company had a similar theft at a previous location. Sunburst has been at its current location three years.