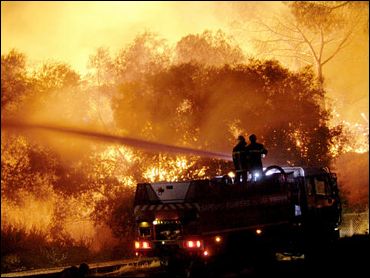 Firefighters speculated the fires in the drought-parched Var region — some 30 that broke out nearly simultaneously Monday — were caused by arson. Molotov cocktails were found in the region, radio and television reports said.

The mayor of Roquebrune-Sur-Argens, Luc Jousse, called the fires "a new form of terrorism."

The blazes were described as the worst ever in the region, which is thick with Mediterranean pine trees and picturesque bays that are magnets for tourists. Shrouds of yellow and gray smoke drifted over the area halfway between Toulon and Nice.

The British women apparently were trying to escape by car when they were caught by flames around La Garde-Freinet, Baudot said. No details were immediately available about the deaths of the Polish man and the Dutch woman. The four victims' identities were being withheld.

Baudot said arson had not been confirmed, but he noted 28 fires broke out Monday. "There is little probability that this is by chance," he said.

Fires raged through some of the most prized vacation areas in Var, concentrated in the areas around Frejus, 25 miles from Cannes, and Sainte-Maxime, to the west.

About 60 houses had been destroyed or damaged in fires that had swept over 21,000 acres by Tuesday morning.

At least seven campsites crowded with vacationers were evacuated near Sainte-Maxime and 11 others near Frejus. Homes also were evacuated in scattered areas.

Electricity was briefly cut overnight in the Gulf of St. Tropez region — a playground for the rich and famous — and numerous roads were closed to traffic.

During a tour of the region, Interior Minister Nicolas Sarkozy called the fires "an ecological massacre." He said the government would deal harshly with those found responsible.

Sarkozy said a Russian helicopter capable of carrying 12 tons of fire retardant was being called in. Italy's Civil Defense Department said it was sending 60 firefighters and 27 vehicles to help the approximately 1,500 French firefighters and soldiers battling the blazes.

"It's the apocalypse," Jousse, the mayor of Roquebrune-Sur-Argens, said on LCI television. He said more than 10,000 people had been evacuated in his sector.

President Jacques Chirac, in Papeete, Tahiti, promised that "the guilty will be sought out with extreme rigor" and "sanctions will be of an extraordinary severity."