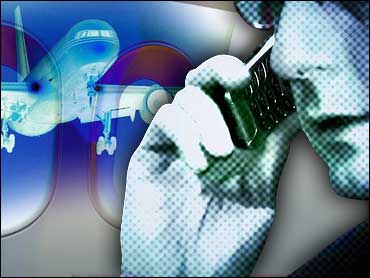 Striking a blow for cell phone haters everywhere, a government agency on Tuesday said it will keep a rule in place that requires the divisive devices to be turned off during airline flights.

The reasoning behind the decision was technical. But the avalanche of comments the Federal Communications Commission has logged from airline travelers have been nothing short of visceral.

"These days it's impossible to get on a bus without at least one person hollering into their cell phone, invading the private space of everyone around them," one member of the public wrote in an e-mail to the FCC. "That's bad enough when one can get off in 10 minutes. To have to suffer through HOURS of such torture, with nowhere to go and miserably cramped conditions — someone is going to explode."

The agency has been considering lifting its ban on cell phone usage on airplanes since 2004. Unlike the Federal Aviation Administration, which bans the use of cell phones and other portable electronic devices for fear they will interfere with navigational and communications systems, the FCC's concern is interference with other cell phone signals on the ground.

Airphones installed in cabins use a special FCC frequency that operates outside the range of regular cellular phones.

In an order released Tuesday, the agency noted that there was "insufficient technical information" available on whether airborne cell phone calls would jam networks below.

Regardless of the reasoning, some passengers are no doubt pleased with the agency's decision. In an e-mail to the FCC, one person related the story of a "dimwitted young lady" who had a "most inane conversation" after his flight had landed.

"The idea of a person being a captive audience to someone yapping on the phone is simply a recipe for a lot of anger and a fair share of conflicts," he wrote.

The phones have been snapped shut for now, at least as far as the FCC is concerned. But the issue may come up again. The agency said it may "reconsider this issue in the future if appropriate technical data is available for our review."