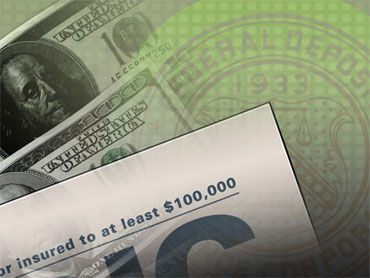 The coffers of the Federal Deposit Insurance Corp. have been depleted by the epidemic of collapsing financial institutions. But the head of the FDIC said today there are no immediate plans to borrow money from the Treasury Department to shore up the shrinking deposit insurance fund.

The FDIC said the number of banks deemed to be in trouble jumped to 416 from 305 at the end of the first quarter.

Small and midsize banks across the country have been hurt by rising loan defaults in the recession. When they fail, the FDIC is responsible for making sure depositors don't lose a cent.

So far this year, 81 banks have failed, compared with just 25 last year - and only three in 2007. Analysts expect hundreds more banks to fail in coming years because of souring loans for commercial real estate. That threatens to deplete the FDIC's fund, which guarantees deposits of up to $250,000 per account.

Bank customers have nothing to worry about: The FDIC is fully backed by the government, which means deposits are guaranteed. And it still has billions in loss reserves apart from the insurance fund.

FDIC could pursue a loan from the Treasury Department, which it did during the savings-and-loan crisis of the early 1990s, when it was forced to borrow $15 billion from Treasury and repay it later with interest.

At the same time, Bair reaffirmed the likelihood of an additional fee on U.S. banks this year to help replenish the fund.

But charging more in premiums would shrink profits at healthy banks, squeeze troubled ones and make lending even tighter.

"The more you levy these assessments on banks, the less money they have to lend to the general population," said Camden Fine, president of the Independent Community Bankers of America, an industry group that represents 5,000 banks.

Last week's failure of Guaranty Bank in Texas, the second-largest this year, is expected to cost the FDIC $3 billion. The FDIC recorded more than $19 billion in losses just through March.

The agency figures it will need $70 billion to cover bank failures through 2013, more than five times the $13 billion that was in the fund in March. The last time it was that low was during the S&L crisis in 1992, when the fund was down to $178 million.

"I think the public should expect the fund to go negative at some point," said Gerard Cassidy, a banking analyst at RBC Capital Markets, which has predicted that up to 1,000 banks - or one in eight - could disappear within three years.

Some critics say regulators have taken too long to shut down troubled banks. Chicago's Corus Bankshares, for example, has staggered for weeks under the weight of bad real estate loans.

FDIC spokesman Andrew Gray said the agency seeks to strike a balance between helping troubled banks work through their problems "so there's zero cost to the deposit fund," and intervening quickly if there are no other options.

Because of the surging bank failures, the FDIC's board voted Wednesday to make it easier for private investors to buy failed financial institutions.

Private equity funds have been criticized for taking too many risks and paying managers too much. But these days fewer healthy banks are willing to buy ailing banks, and the depth of the banking crisis appears to have softened the FDIC's resistance to private buyers.

Under the new rules, a buyer would need to maintain the failed bank's reserves at levels equal to 10 percent of its assets. An earlier proposal set the requirement at 15 percent.

The new policy also eases the rules on when private investors must maintain minimum levels of capital that might be needed to bolster banks they own.

But the FDIC sought to guard against private equity funds that might want to quickly buy and sell at a profit: It required the investors to maintain a bank's minimum capital levels for three years.

At least in theory, allowing private investors to buy failing banks would mean the FDIC could charge a higher price, shrinking the amount of losses the agency would have to cover.

Bair has not ruled out hiking premiums on banks for the second time this year or asking the Treasury for a short-term loan. She has said taking the longer-term step of drawing on the Treasury credit line is only for emergencies.