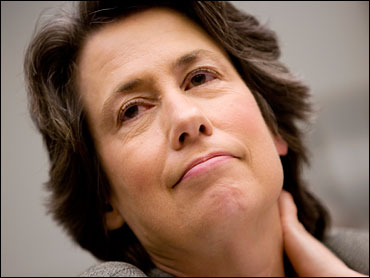 Federal Deposit Insurance Corp. Chairman Sheila Bair is pushing back against key elements of the Obama administration's financial overhaul plan, saying they wouldn't survive in Congress and calling her own alternatives more viable.

In an interview with The Associated Press, Bair said Congress won't approve two major parts of the package: Expanding the Federal Reserve's authority to regulate the largest financial companies and giving a proposed new consumer protection agency examination and enforcement powers over banks.

Such authority now belongs to her agency and other bank regulators.

Bair said alternatives she has backed would "provide a framework that can actually get through Congress." Her ideas include empowering a new agency to protect consumers from abusive mortgage and credit card products - but having bank supervisors enforce those rules.

Her statements highlight Treasury's uphill struggle to sell the administration's proposed financial overhaul to Congress and the public. Since the plan was rolled out in June, industry groups have balked at rules they say will burden companies and raise borrowers' costs. Bank industry lobbyists are leading the charge against major parts of the plan.

Congress has objected to concentrating more power in the Fed. Critics note that the central bank failed to properly use its consumer protection authority before the crisis erupted.

Bair and other federal regulators have voiced their own opposition to parts of the plan, in what some Obama officials have dismissed as efforts to protect their turf.

Bair says she's raising legitimate policy questions. As head of an independent regulatory agency, she said she has a duty to tell Congress her opinion.

Amid concerns the plan is faltering, top Treasury officials have defended it in a series of interviews this week. They have insisted the plan is on track and have played down differences among regulators.

"What's important is, at the end of the day, that we all keep our eyes on the prize, make sure we're all pointed toward comprehensive reform of the financial services sector," Deputy Treasury Secretary Neal Wolin told the AP in a separate interview.

He said it's not surprising "that in understandable Washington style, (regulators) defend their own institutions."

Wolin said he worries that Bair's view that the administration plan can't pass Congress could become "a self-fulfilling prophecy."