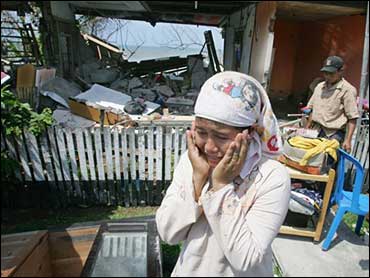 Some villagers in western Indonesia started returning home Saturday, three days after a mammoth quake jolted the region and generated a powerful string of aftershocks. But many remained jittery - a feeling experts say may be justified.

The 8.4-magnitude quake that shook Southeast Asia on Wednesday has been followed by more than 60 strong aftershocks - including a magnitude 7.8 and a 7.1 - that have killed at least 17 people, damaged hundreds of homes and churned up a 10-foot-high tsunami.

Many people in affected areas have been camping out on high ground away from the ocean. But with electricity back on in most places and no major aftershocks felt on Saturday, some were beginning to reopen shops and clean up debris around their homes.

Several experts warn the worst may not be over yet. They are predicting a repeat of the massive earthquake that triggered the 2004 Asian tsunami, which killed more than 230,000 people in a dozen Indian Ocean nations.

"We are a huge step closer," said John Galetzka, a researcher from the California Institute of Technology. "I think it's just around the corner."

Geologists say the biggest quakes in the area are all on the edge of the Mentawai island patch - which last experienced a mammoth temblor in 1833 - and have piled even more pressure onto the fault.

Five major earthquakes on Sumatra since 2000 have helped to relieve some stress. But Siberut island, part of the Mentawaian archipelago, sits directly over the one spot where pressure continues to build.

"We are kind of in amazement that with so much activity going on around here ... it hasn't cut loose," said Galetzka, who was setting up a data recording station on the island, around 93 miles off the coast of Padang, when the three quakes struck last week.

Since 1999, Galetzka and colleagues have been analyzing data from transmitters across the region. Authorities have predicted the next big one that spawns a tsunami could kill up to 60,000 people near the low-lying seaside town of Padang.

Aid was making its way to hard-hit areas, though some residents claimed it was slow in coming.

With roads damaged and communication cut, getting accurate casualty figures was a challenge. Authorities raised the death toll to 17 Saturday after information came in from remote regions, said Rustam Pakaya, the chief of Health Crisis Center. At least 88 were injured.

Many people said a public awareness campaign launched after the 2004 tsunami paid off, including warnings issued over mosque speakers and training provided by local officials on how to escape a disaster.

"When the earth started shaking, some people yelled, 'It's time to go up the hill ... let's get going," said Fadil, 35, a father of two, describing how he and hundreds of neighbors watched from above as the 10-foot wave approached. Hundreds of houses were damaged, but no one died.

Elsewhere, however, electricity blackouts prevented some sirens from going off.

That's exactly what residents along Sumatra's western coast, which is expected to bear the brunt of the next disaster, are worried about. The island was hardest hit by the 2004 tsunami, accounting for nearly two-thirds of the deaths.

In the tiny fishing village of Sungai Pisang, just south of the badly damaged city of Padang, hundreds of people were too scared to return home after the recent tremors sent a large wave washing into their bay.

Indonesia, the world's largest archipelago, with a population of 235 million people, is prone to seismic upheaval due to its location on the "Ring of Fire," an arc of volcanos and fault lines encircling the Pacific Basin.