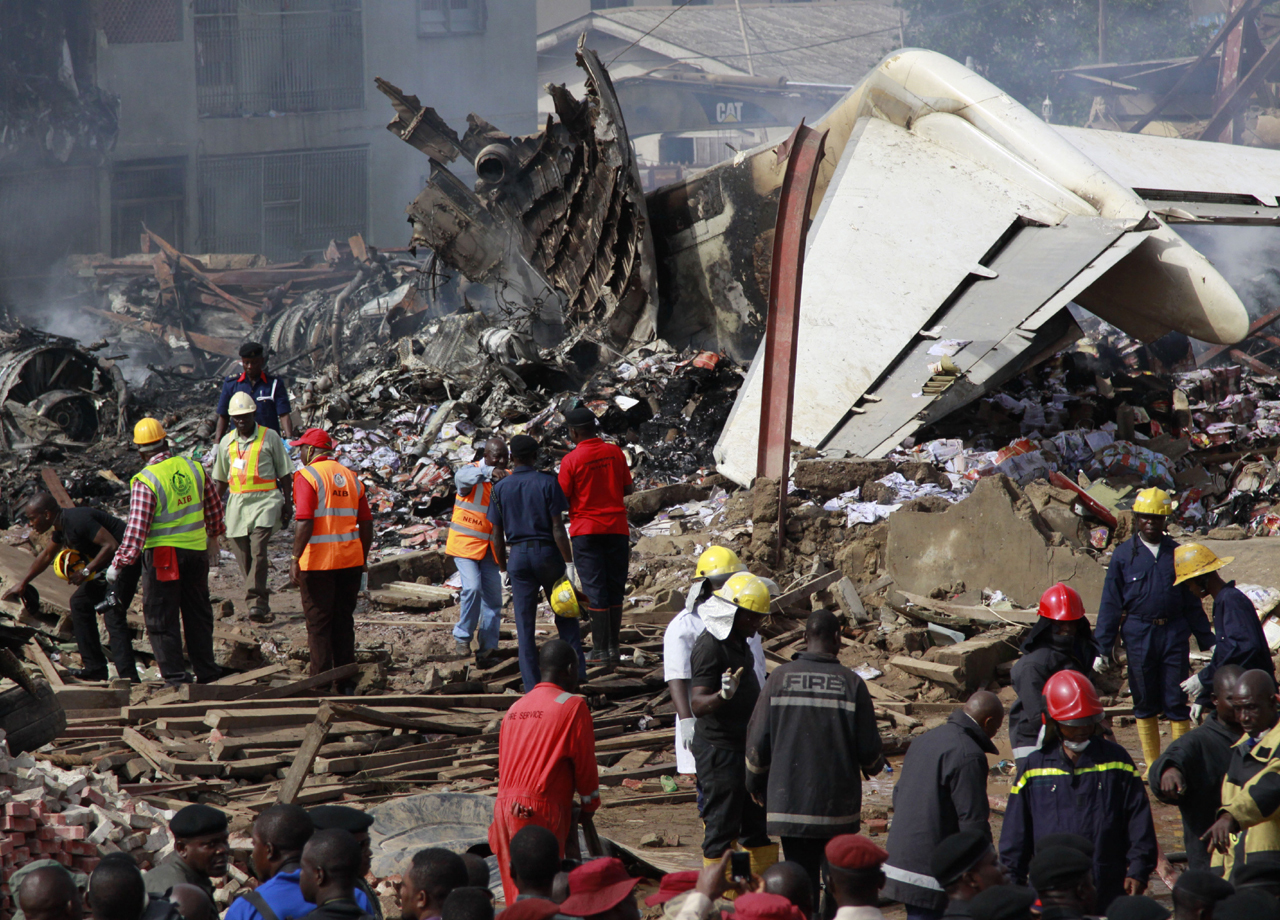 (CBS/AP) LAGOS, Nigeria - Police dogs sniffed for dead bodies Monday in the rubble of buildings destroyed when an airliner crashed into them, killing all 153 aboard, as cranes lifted away heavy pieces of debris in the grisly aftermath of Nigeria's worst air disaster in nearly two decades.

A Nigeria Red Cross report said 110 bodies had been recovered, with more being dug out from the rubble. A U.S. official said American citizens had been aboard the flight.

The Dana Air jetliner smashed into businesses and crowded apartment buildings near Lagos' Murtala Muhammed International Airport, the worst air disaster in Nigeria in nearly two decades. The airline said an investigation had begun into the cause of Sunday's crash.

The aircraft's black box recorders where flight data is stored had still not been found by Monday, said Harold Demuren, the director-general of the Nigerian Civil Aviation Authority.

In Washington, a State Department official confirmed that there were "a number" of American citizens on board, most, if not all, of whom were dual U.S.-Nigerian nationals. The official said consular officials in Lagos, Abuja and Washington were still reviewing the flight manifest to determine exactly how many Americans were on the plane. The official spoke on condition of anonymity because he was not authorized to discuss the matter publicly.

Rescue officials said they fear many more people may have perished on the ground.

"The fear is that since it happened in a residential area, there may have been many people killed," said Yushau Shuaib, a spokesman for Nigeria's National Emergency Management Agency.

The twin-engine jet appeared to belly-flop into an apartment building in a densely-populated suburb of Lagos close to Murtala Muhammed International Airport, reports Tony Guida.

The plane tore through roofs, sheared a mango tree and rammed into a woodworking studio, a printing press and at least two apartment buildings before stopping. The plane was heading to Lagos from Abuja, the capital, when it went down.

A white, noxious cloud rose from the crash site that burned onlookers' eye. Pieces of the plane were scattered around the muddy ground.

Thousands of residents swarmed the smoking ruins taking cell phone pictures. The crowd was so large that ambulances, sirens wailing, could not get through.

A Nigeria Red Cross report said that 48 bodies had been recovered, with more being dug out from the rubble. Dozens of residents pitched in to drag a fire hose to the crash site.

The dead included at least four Chinese citizens, the official Chinese news agency Xinhua reported late Sunday, citing Chinese diplomats in Nigeria. Officials at the Chinese embassy in Nigeria could not be reached for comment by the AP. Two of the crash victims were Lebanese, according to state-run Lebanon's National News Agency. The NNA identified them as Nadim Chediac, an architect who has a Lebanese father and Nigerian mother, and Roger Awwad, an investor.

In the wake of the crash, Nigeria's president has declared 3 days of national mourning.

On Monday morning the debris still smoldered. Some people wore masks to try and protect themselves from the stench of the dead, as police with cadaver dogs searched for bodies inside the wreckage.

Overnight officials had brought in a large crane from a local construction company to lift pieces of debris away, and blow torches to cut through what remains of the plane.

Using the crane rescue workers lifted the tail of the aircraft; the metal shrieked as it was raised skyward and then dropped down.

Nigerian President Goodluck Jonathan spent about 20 minutes looking at the wreckage with federal lawmakers and said the crash was a setback to Nigeria's growing aviation industry.

"We will make sure this will not repeat itself in this country," he said, a pledge that will be hard to keep in a nation with a history of major passenger plane crashes in the last 20 years.

The cause of the crash remained unclear. The pilots radioed to the Lagos control tower just before the crash, reporting engine trouble, a military official said. The official spoke on condition of anonymity as he was not authorized to speak to journalists.

Demuren said the Nigerian registration number of the Boeing MD-83 was 5NRAM. Aviation databases show the plane was exported to Nigeria in early 2009. It was first delivered in 1990 with the U.S. registration number N944AS to Alaska Airlines and it suffered two minor incidents while in the Seattle-based airline's service, according to databases of the Federal Aviation Administration and the Aviation Safety Network. On Nov. 2, 2002, the plane made an emergency diversion due to smoke and electrical smell in the cabin, and on Aug. 20, 2006, the plane was evacuated after landing at Long Beach, Calif., because of smoke in the passenger cabin.

Boeing said in a statement on its website that the company is ready to provide technical assistance to the Civil Aviation Authority on Nigeria through the U.S. National Transportation Safety Board.

Bobbie Egan, spokeswoman for Alaska Airlines, said she had no information on the aircraft that may have been used several years ago by the airline and referred calls to Alaska's corporate communications office, which was not yet open.

On April 19, 2010, the plane made an emergency landing at Lagos due to loss of engine power after a bird strike following takeoff, according to the Aviation Safety Network.

While local residents helped carry fire hoses to the crash site, the major challenges of life in oil-rich Nigeria quickly became apparent as there wasn't any water to put out the flames more than three hours later. Some young men carried plastic buckets of water to the fire. Fire trucks, from the very few that are stationed in Lagos state with a population of 17.5 million, couldn't carry enough water. Officials commandeered water trucks from nearby construction sites, but narrow, crowded roads prevented them from reaching the crash site.

Nigeria, home to more than 160 million people, has a history of major aviation disasters, though in recent years there hasn't been a crash. In August 2010, the U.S. announced it had given Nigeria the Federal Aviation Administration's Category 1 status, its top safety rating that allows the West African nation's domestic carriers to fly directly to the U.S.

But many travelers remain leery of some airlines. The country is beset by government corruption and mismanagement.

On Saturday night, a Nigerian Boeing 727 cargo airliner crashed in Accra, the capital of Ghana, slamming into a bus and killing 10 people. The plane belonged to Lagos-based Allied Air Cargo.

Lagos-based Dana Air has five aircraft in its fleet and runs both regional and domestic flights. It has announced on its website that all Monday flights have been canceled. Local media reported a similar Dana flight in May made an emergency landing at the Lagos airport after having a hydraulic problem.

Nigeria has tried to redeem its aviation image in recent years, saying it now has full radar coverage of the entire country. However, in a nation where the state-run electricity company is in tatters, the power grid and diesel generators sometimes both fail at airports, making radar screens go blank.

Sunday's crash appeared to be the worst since September 1992, when a military transport plane crashed into a swamp shortly after takeoff from Lagos. All 163 army soldiers, relatives and crew members on board were killed.