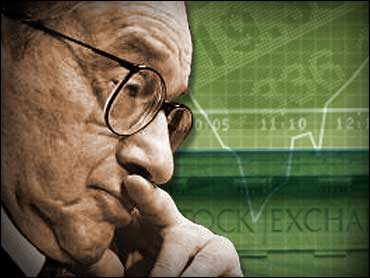 U.S. banks - hit by troubled loans over the past several years - have been able to weather the recession and stay in good health, Federal Reserve Chairman Alan Greenspan said Monday.

That's because banks had solid balance sheets going into the slump and banks benefited from increased diversification, which allowed them to not only to better spread their risks across a wider range of customers but also to broaden their sources of funding, Greenspan said.

"Our banks have been able to retain their strength in this business cycle, in contrast to the early 1990s when so many either failed or had near-death experiences," Greenspan said in a speech delivered via satellite to the American Bankers Association, which was holding its annual convention in Phoenix.

A copy of Greenspan's remarks was distributed in Washington.

"That banks had impressive earnings and balance sheets going into the current period of stress is of key significance," Greenspan explained. "Some banks also benefited from the increased diversification and scale of their operations that had resulted from previous consolidations," he added.

Another factor that played a role in banks' resilience during the slump was that the recession itself was mild and its main source of weakness came from cutbacks in spending and investment by businesses - not by consumers, the economy's main engine, Greenspan said.

Although the stock market slide made it much more difficult for some companies to repay bank loans and other debt and made companies wary of making big commitments to capital spending, the story was different for consumers, Greenspan said.

"Consumer and mortgage loans have not suffered the sharp run-up in delinquencies that loans in the business sector have, and they contributed significantly to the earnings of the banking system, providing it with the ability to absorb losses elsewhere, to maintain loss reserves and still show significant profits," Greenspan said.

Greenspan, in his speech, did not discuss the state of the U.S. economy or the future course of interest rates.

Over the objection of two Federal Reserve policy-makers, Greenspan and his Federal Open Market Committee colleagues last month opted to hold short-term interest rates steady at 41-year lows. The two dissenters favored a rate cut, the first of the year.