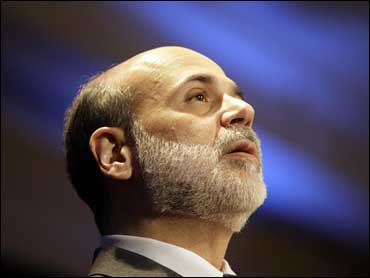 The Federal Reserve delivered a vote of confidence in the recovery on Wednesday, declaring that U.S. economic activity is "leveling out." The central bank also signaled that it would end one of its programs aimed at propping up the economy, and kept a key lending rate at a record low.

The Fed said it would gradually slow the pace of its program to buy $300 billion worth of Treasury securities so that it will shut down at the end of October, versus September. It has bought $253 billion of the securities so far.

The program is aimed at lowering rates on mortgages and other consumer debt, a move to spur Americans to spend more. But its effectiveness has been questioned by some on Wall Street and on Capitol Hill who worry that the program makes it look like the Fed is printing money to pay for Uncle Sam's exploding deficits.

With the economy on the mend, the Fed held a key banking lending rate at a record low near zero and again pledged to keep it there for "an extended period."

Economists predict the Fed will leave its target range for its banking lending rate between zero and 0.25 percent through the rest of this year. The rationale: super-low lending will spur Americans to spend more, which would support the economy.

If the Fed holds its key rate steady, that means commercial banks' prime lending rate, used to peg rates on home equity loans, certain credit cards and other consumer loans, will stay around 3.25 percent, the lowest in decades.

It was the first Fed meeting since the economy has flashed more definitive signs of turning a corner.

In an upgraded assessment, the Fed said the economic barometers since its last meeting in late June suggest that "economic activity is leveling out." Conditions in financial markets also "have improved further" in recent weeks, the Fed said.

Although consumer spending has stabilized, job losses, sluggish income growth, hits to wealth from tanking home values and still hard to get credit could make Americans cautious in the months ahead, the Fed said.

Meanwhile, the majority of economists polled by the Wall Street Journal expressed support for Ben Bernanke, saying the Fed chairman should get another term. Most of the economists said the 20-month-old recession is now over and gave Bernanke much of the credit.