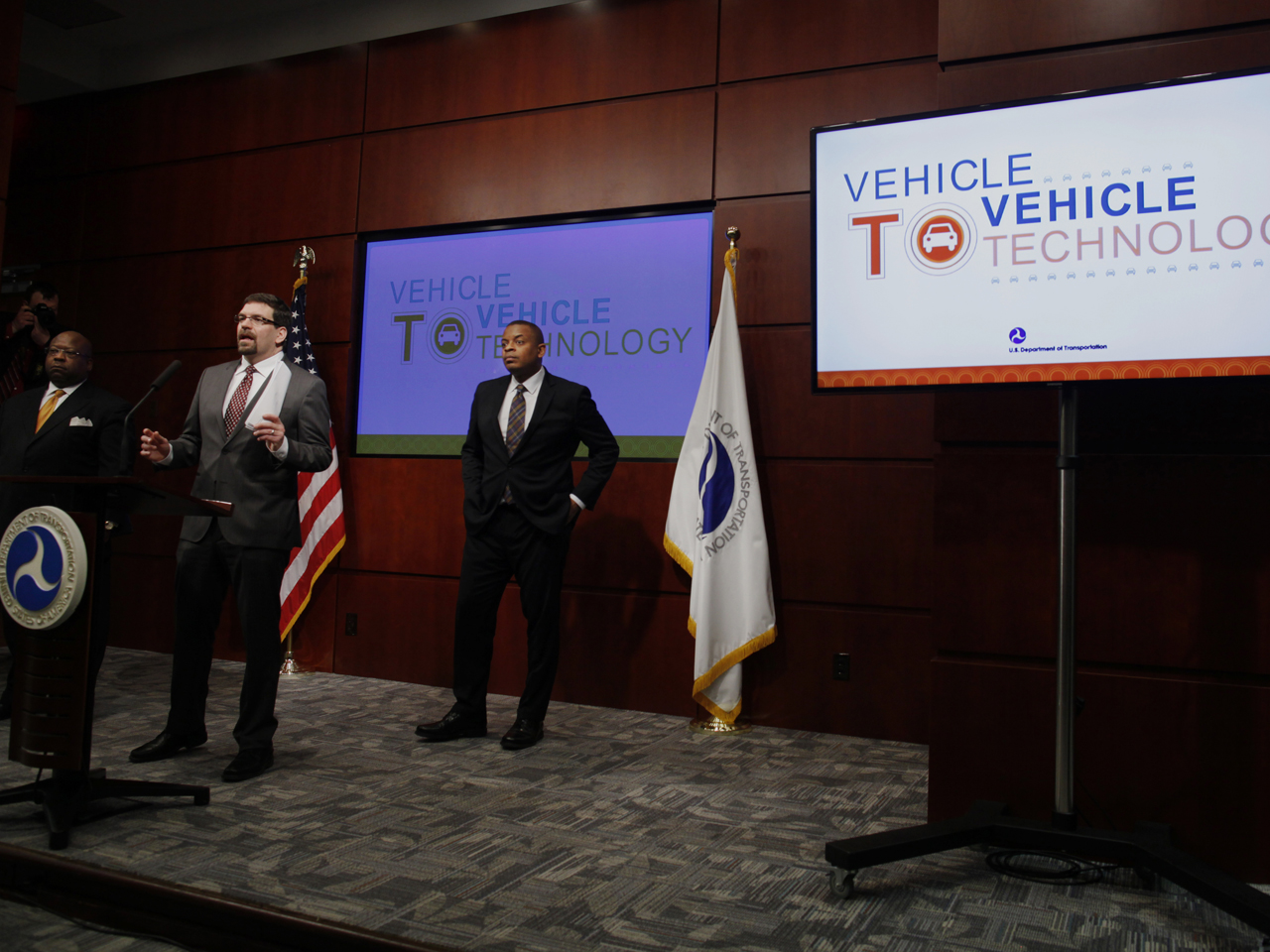 WASHINGTON - Your car might see a deadly crash coming even if you don't, the government says, so officials are moving to require automakers to equip new vehicles with technology that lets them warn each other when they're plunging toward peril.

The action, still a couple of years off, has "game-changing potential" to cut crashes, deaths and injuries, officials said Monday.

A radio transponder would continually transmit a vehicle's position, heading, speed and other information. Cars would receive the same information back from other vehicles, and a vehicle's computer would alert the driver to an impending collision. Some systems may automatically brake to avoid an accident if manufacturers choose to include that option.

The National Highway Traffic Safety Administration, which has been working with automakers on the technology for the past decade, estimates vehicle-to-vehicle communications could prevent up to 80 percent of accidents that don't involve drunken drivers or mechanical failure.

The technology holds major potential to prevent crashes in the first place, while the government's focus until now has been on ensuring accidents are survivable, David Friedman, the head of the safety administration, said at a news conference.

Transportation Secretary Anthony Foxx said the Obama administration decided to announce its intention to require the technology in new vehicles in order to "send a strong signal to the (automotive industry) that we believe the wave of the future is vehicle-to-vehicle technology."

However, it will still be a least several years and perhaps longer before manufacturers would have to put the technology in vehicles, officials said. The safety administration plans to issue a report later this month on the results of its research, and then the public and automakers will have 90 days to comment. After that, regulators will begin drafting a proposal to require automakers to equip new vehicles with the technology. That process could take months to years to complete, but Foxx said it is his intention to issue the proposal before President Barack Obama leaves office.

"It will change driving as we know it over time," said Scott Belcher, president and CEO of the Intelligent Transportation Society of America. "Over time, we'll see a reduction in crashes. Automobile makers will rethink how they design and construct cars because they will no longer be constructing cars to survive a crash, but building them to avoid a crash."

Government officials declined to give an estimate for how much the technology would increase the price of a new car, but the transportation society estimate it would cost about $100 to $200 per vehicle.

Automakers are enthusiastic about vehicle-to-vehicle technology, but feel there are important technical, security and privacy questions that need to be worked out first, said Gloria Bergquist, a spokeswoman for the Alliance of Automobile Manufacturers.

Vehicle-to-vehicle "may well play a larger role in future road safety, but many pieces of a large puzzle still need to fit together," she said.

The safety benefits can't be achieved until there is a critical mass of cars and trucks on the road using the technology, and it's not clear what that level of market penetration is. It takes many years to turn over the nation's entire vehicle fleet, but the technology could start preventing accidents long before that. Research indicates safety benefits can be seen with as few at 7 percent to 10 percent of vehicles in a given area similarly equipped, said Paul Feenstra, a spokesman for the transportation society, an umbrella organization for the research and development of new transportation technologies.

Once automakers start adding the technology to all new cars, it would take 15 years or more for half the cars on the nation's roads to be equipped, according to the communications technology company Qualcomm. There are about 5 million to 6 million new cars sold each year.

There may be a way to speed things up. About 45 percent of Americans use smartphones, and that share is growing. The average lifetime of a smartphone is two years. If smartphones, which already have GPS, came equipped with a radio chip they could be used to retrofit vehicles already on the road so that they can talk to each other. The phone would be put in a cradle to sync with the car's computers. That would help make it possible to achieve a 50 percent market penetration in less than five years, according to Qualcomm.

Using cellphones could also extend the safety benefits of connected-car technology to pedestrians, bicyclists and motorcyclists, Belcher said. Drivers would be alerted to a possible collision with a pedestrian carrying a smartphone that continually sends out information to cars in the vicinity, even if it's too dark to see the person or if the pedestrian darts suddenly into traffic. More than 4,700 pedestrians were killed by vehicles and 76,000 injured in 2012.

But there are significant technical and standardization hurdles to using cellphones to support connected car technology. Cellphone batteries typically last only about three hours if used continually. They would need antennas, there are issues with what radio frequencies would be used and their GPS functions may not be as precise as those in a vehicle manufactured with connected car technology, for example.