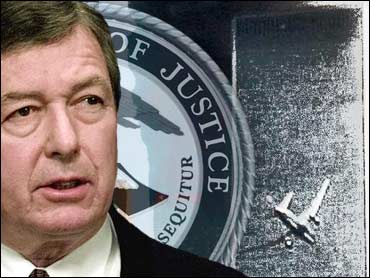 A special court with power over sensitive law enforcement surveillance misinterpreted a broad anti-terrorism law when it ordered the Justice Department to alter new guidelines for FBI terrorism searches, the agency said in an appeal made public Friday.

The U.S. Foreign Intelligence Surveillance Court ruled in a May 17 decision that the USA Patriot Act did not justify the use of certain investigative techniques.

In the appeal, Attorney General John Ashcroft said the court failed to acknowledge that the new law, passed in response to the Sept. 11 attacks, and altered the standard lawyers must meet when seeking to monitor a person and share information between criminal detectives and terrorism investigators.

Before the Patriot Act was signed by President Bush late last year, government officials had to prove their primary purpose for monitoring was foreign intelligence.

But under the act, Ashcroft argued, federal lawyers may share information and monitor people in cases in which law enforcement is the primary interest. Government lawyers need only show there is a significant foreign intelligence purpose related to the activity, Ashcroft said.

Ashcroft's appeal was in response to a ruling from the secretive federal court that approves spying on terror suspects, which said that it had been misled dozens of times by the FBI and Justice Department officials.

Documents released Thursday showed that the U.S. Foreign Intelligence Surveillance Court, which has not publicly disclosed any of its rulings in nearly two decades, said FBI and Justice officials in pursuit of search warrants or wiretap authorizations to spy on suspected terrorists had supplied erroneous information to the court on 75 occasions.

One of the misrepresentations was attributed to former FBI Director Louis Freeh.

"How these misrepresentations occurred remains unexplained to the court," the special court said. Eleven federal judges sit on the panel.

The court also said that intelligence gathered about terror suspects had been improperly shared with prosecutors and FBI agents handling criminal investigations.

In an appeal made public Friday, Attorney General John Ashcroft said the court failed to acknowledge that the USA Patriot Act, passed in response to the Sept. 11 attacks, and altered the standard lawyers must meet when seeking to monitor a person and share information between criminal detectives and terrorism investigators.

Because of these alleged improprieties, the surveillance court imposed restrictions on procedures formulated by Attorney General John Ashcroft to permit greater cooperation and information-sharing between terrorism investigators and criminal prosecutors.

The court said the information-sharing proposal was "not reasonably designed" to safeguard the privacy of Americans.

As a result, the Justice Department amended the guidelines and won the court's approval. But the Bush administration said it was appealing the court's restrictions on the sharing of information between terrorism investigators and criminal investigators.

The court's orders, signed by U.S. District Judge Royce Lamberth, were disclosed to the Senate Judiciary Committee, which has raised questions about the Justice Department's use of wiretap laws in espionage and terrorism cases.

In March, Ashcroft, in a memorandum to FBI Director Robert Mueller and senior Justice officials, made it easier for investigators in espionage and terrorism cases to share information from searches or wiretaps with FBI criminal investigators.

But the surveillance court, which considers federal search and wiretap requests in secret under the 1978 Foreign Intelligence Surveillance Act, found that Ashcroft's rules could allow misuse of information in criminal cases. Prosecutors in criminal cases must meet higher legal standards to win approval for searches or wiretaps.

"These procedures cannot be used by the government to amend the (surveillance) act in ways Congress has not," the court wrote. In its rare public rebuke, it said the Justice Department spent "considerable effort" arguing its case, "but the court is not persuaded."

Justice spokeswoman Barbara Comstock said that the decision hampers use of the surveillance law.

"They have in our view incorrectly interpreted the Patriot Act, and the effect of that incorrect interpretation is to limit the kind of coordination that we think is very important," she said.

Ashcroft had argued that, under changes authorized by the Patriot Act, the FBI could use the 1978 surveillance law to perform searches and wiretaps "primarily for a law enforcement purpose, so long as a significant foreign intelligence purpose remains."

Critics of the 1978 law said it may have hampered the federal investigation of Zacarias Moussaoui prior to the Sept. 11 attacks. Moussaoui now is awaiting trial on conspiracy charges in the attacks.

The Patriot Act changed the surveillance law to permit its use when collecting information about foreign spies or terrorists is "a significant purpose," rather than "the purpose" of an investigation. Critics at the time said they feared government might use the change to employ espionage wiretaps in common criminal investigations.

"The attorney general seized authority that has not been granted to him by the Constitution or the Congress," said Marc Rotenberg, head of the Washington-based Electronic Privacy Information Center.

In a follow-up order also disclosed Thursday, the court accepted new Justice guidelines amending Ashcroft's instructions. The court also demanded to be told about any criminal investigations of targets under the surveillance act and about discussions between the FBI and prosecutors at Justice.

"The first Ashcroft order sort of snugged up against the new line that was being drawn, and that may not have been prudent," said Stewart Baker, an expert on the law and former general counsel at the National Security Agency. "You might be able to justify it legally, but I can see why the court would have reacted badly."

Critics have worried that the surveillance court is too closely allied with the government, noting that judges have rarely denied a request under the 1978 law. But the newly disclosed court's orders indicated irritation with serious FBI blunders in 2000 and 2001.

The court said the FBI admitted in September 2000 to mistakes in 75 wiretap applications, including Freeh's erroneous statement to judges that the target of a wiretap request wasn't also under criminal investigation.