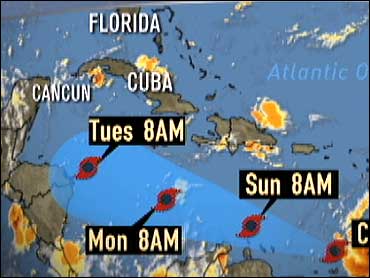 Hurricane Felix gathered strength Saturday and pounded Grenada with heavy rains and winds, snapping small boats loose from their moorings and toppling utility poles on its route toward the Caribbean island of Aruba.

The storm was upgraded from a tropical storm to a Category 1 hurricane Saturday evening, with sustained maximum winds near 75 mph. It was expected to strengthen even further as its outer bands started hitting the islands of Aruba, Bonaire and Curacao late Saturday or early Sunday.

Tropical Storm Henriette, meanwhile, was moving out to sea after dumping rain on Mexico's Pacific coastline. In Acapulco, the storm loosened a boulder that smashed into a home, killing three people. A teenager and her two brothers were also killed when a landslide slammed into their house in a poor neighborhood of the glitzy resort.

Felix swept over Grenada on Saturday, knocking local radio and TV stations out of service and toppling utility lines. No injuries were immediately reported, but the storm ripped roofs off at least two homes and a popular concert venue was demolished. Orchards were left in ruin.

Jess Charles, 29, said he and his family waited out the storm in their house in the town of Calliste, listening to its howling winds.

"It was really very, very scary. The wind was blowing so hard we thought our roof might come off," Charles told The Associated Press.

Felix became the sixth named storm of the 2007 Atlantic hurricane season early Saturday, spawning thunderstorms and downing trees in Barbados, St. Vincent and the Grenadines, and the twin-island nation of Trinidad and Tobago. The Caribbean islands reported only minor damage.

At 8 p.m. EDT, Felix was centered about 155 miles east of Bonaire and 270 miles east of Aruba and was moving westward at about 18 mph, the U.S. National Hurricane Center said.

In Aruba, residents stocked up on groceries, flashlights and window-reinforcements. Tourists crowded the airport to catch flights out before the storm arrived.

A long line of customers snaked through the Wema Home and Hardware Center in Aruba's capital, which was doing a brisk business selling plywood and boards as jittery residents and employees of gleaming tourist hotels prepared to safeguard windows and doors.

"This kind of weather doesn't usually make it to Aruba, so people are definitely worried," said store cashier Mark Werleman.

A tropical storm warning was issued for Aruba, Bonaire and Curacao, and a tropical storm watch was issued in Jamaica, further to the west. The storm was predicted to skirt Jamaica and the coast of Honduras and possibly make landfall in Belize sometime on Wednesday before crossing over Mexico's Yucatan peninsula.

Rebecca Waddington, a meteorologist at the hurricane center, advised employees of oil platforms in the Gulf of Mexico to monitor Felix's progress. She said the storm could enter the area in four to five days.

A tropical storm warning was also in effect along Mexico's coast from Punta San Telmo to Cabo Corrientes, even though Tropical Storm Henriette was moving out to sea.

With maximum sustained winds of 65 mph, the storm was expected to become a hurricane by Sunday, but forecasters put it on a path that did not threaten land until Thursday, when it could hit a remote section of the Baja California peninsula.