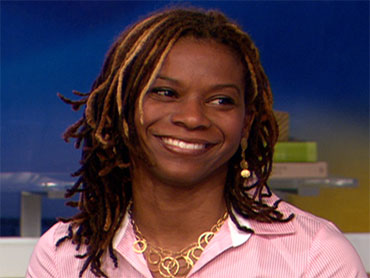 The 29-year-old was introduced Friday as the new head coach of the school's football team.

Robinson said, "Head Coach is a big, a big job for anybody. ... That's pretty cool. But I really want to make sure that I give the best that I can for the kids."

Robinson was a wide receiver for five years for the pro women's football team, the D.C. Divas. She also played on special teams.

Her former teammates say she's got the right stuff.

Jordyn White, former teammate, told CBS News, "When you meet her, you may think that's she's you know, meek and mild, but she's tough as nails."

Oljwafemi Baniro said, :I mean she's probably better than most of us players."

As for Robinson, she says she just wants to make the school's football program great.

She said on "The Early Show" Tuesday a colleague suggested she apply for the position.

Robinson said, "I was like, 'Well, maybe this is something that I could do.' And that's how it can about."

"Early Show" co-anchor Harry Smith pointed out that Robinson, as a teacher, will also be especially mindful of the academics her players.
"Definitely," she responded. "My kids know that they need to do what they need to do in the classroom, otherwise there is no athletics. I preach that to my regular students and the football players."

However, it's not going to be easy. Smith asked, "Do (your players) know that you are just so going to crack the whip? I mean, just going to be so tough on them?"

"The ones that have me as a teacher know that," she said.

Robinson's fiancé is a football coach in another D.C. school. She said he's been supportive of her new position, despite her being one of his competitors now.

As for living up to the expectations of others, Robinson said she's just "trying to stay focused on the job at hand."

"There's tons to do as a teacher and as a coach, so I'm trying to put my blinders on," she said. "... It hasn't been too much of a problem other than being gone and having to make appearances and things like that. But it's been great."