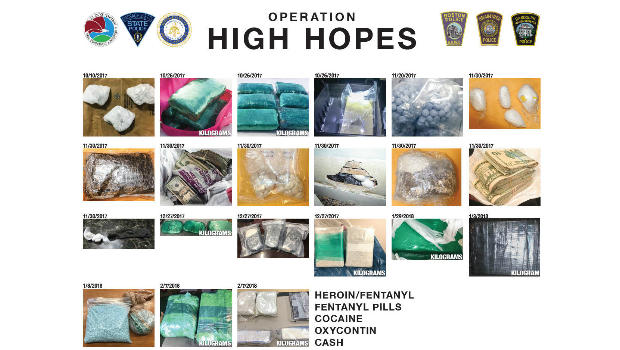 State and federal law enforcement officials announced Thursday they seized some 77 pounds of various illicit drugs in the Boston area -- including more than 30 pounds of fentanyl -- as the result of "Operation High Hopes," according to a press release by the Suffolk County District Attorney's office. They say it's "one of the longest, most far-reaching, and most successful state wiretap investigations in Massachusetts history."

Suffolk County District Attorney Daniel Conley says the investigation led to more than a dozen arrests and dismantled two Boston-area drug trafficking organizations. About $300,000 in alleged drug money was also seized. He added that fentanyl, heroin, cocaine and opiate tablets are believed to have originated from Mexico's Sinaloa Cartel.

Fentanyl is so powerful, Conley says, that mere milligrams can be lethal.

"The number of overdoses it could have caused is truly staggering," Conley wrote in the press release. "Individuals who buy and sell at this level aren't users. They're not small time dealers, either. They're certainly not selling to support a habit. They're trafficking in addictive substances that claim more lives in Massachusetts than all homicides, all suicides and all car crashes, statewide, combined."

Boston Police Commissioner William B. Evans heralded the successful sting in the written statement: "These arrests and seizures will have a tremendous impact on the quality of life in Boston and many other Massachusetts cities and towns," Evans said. "I commend the work of my detectives and all our law enforcement partners who worked tirelessly over the past six months of Operation High Hopes."

The DEA Special Agent in Charge Michael J. Ferguson echoed that sentiment: "Those responsible for distributing lethal drugs like fentanyl to the citizens of Massachusetts need to be held accountable for their actions. DEA's top priority is combating the opioid epidemic by working with our local, county and state law enforcement partners to bring to justice those that distribute this poison."

Edward Soto-Perez, 43, of Roxbury, Nelson Catala-Otero, 37, of Brockton and Julio Cuello, 52, of Dorchester were arraigned in November on multiple drug trafficking charges after the execution of wiretap-based search warrants, according to the press release. They were held on bails ranging from $100,000 to $250,000 and will return to court Feb. 13.

Robert Contreras, 42, of Roxbury, is their alleged supplier and was one of more than a dozen people arrested Thursday. He's being held on $1 million bail and will return to court Feb. 28.

The investigation began in July 2017 as authorities were closing in on Soto-Perez's operation using cooperating witnesses, controlled purchases, physical surveillance and other means -- but he was smart in concealing where he stored his supply or who his supplier was.

"In the months that followed, the court extended the wiretap 11 times and approved interceptions on more than two dozen phones. Investigators doubled as codebreakers to reveal the criminal enterprise as it unfolded ... Ironically, the wiretap that Soto-Perez's precautions made necessary revealed facts and evidence we might never have obtained otherwise.

U.S. deaths from drug overdoses skyrocketed 21 percent in 2016, and has dragged down Americans' life expectancy.

The drug deaths weigh into the Centers for Disease Control's (CDC) annual calculation of the average time a person is expected to live. The life expectancy figure is based on the year of their birth, current death trends and other factors. For decades, it was on the upswing, rising a few months nearly every year. But last year marked the first time in more than a half century that U.S. life expectancy fell two consecutive years.

In October 2017, President Trump declared the opioid epidemic a public health emergency, calling it a "national shame" and a "human tragedy." But he stopped short of proclaiming a national emergency, which would have unlocked more money and resources to combat the problem.

"This is urgent and deadly," said Dr. Brenda Fitzgerald, director of the CDC. The opioid epidemic "clearly has a huge impact on our entire society."