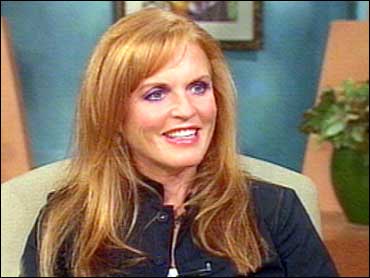 Compex Technologies has retained Ferguson to make personal appearances and appear in commercials for its Flex abdominal belt, a $149 device that uses electrical stimulation to produce muscle contractions.

The ads began running this week and will continue throughout the year on about a dozen network and cable channels.

Ferguson was married for 10 years to Prince Andrew, son of Queen Elizabeth. When the couple divorced in 1996, Ferguson lost her royal title but remained a duchess.

"She is the most real and down to earth of the British royals," said Marshall Masko, vice president of marketing for Compex, which is based in suburban Minneapolis. "She's known as having overcome some obstacles — her weight, her divorce."

Masko said Ferguson's contract specifies that her pay not be revealed, but added, "We spent a lot of money, frankly, to get her."

"My personal trainer recommended that I try Slendertone products," said Ferguson in the company's press release. "I was impressed with clinical studies that show the products do effectively strengthen and tighten muscles."

Later this summer, Masko said, the company will introduce a new line of women's shorts that use electrical stimulation for toning hips, thighs and derrieres. Ferguson also will appear in a TV ad for that product, which will retail for $199.

Ferguson has been a paid endorser for Weight Watchers since 1997.