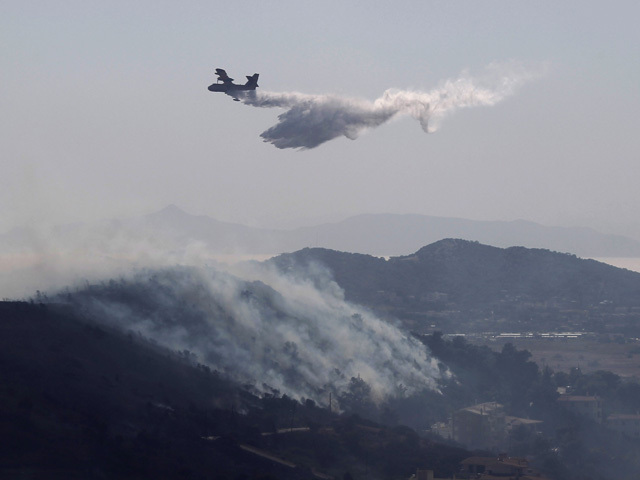 (AP) ATHENS, Greece - Greek police arrested four people Saturday for accidentally causing a fire raging south of Athens and threatening houses. Three firefighters have been injured, one with extensive burns, but no civilian casualties have been reported.

Police say the four were doing a welding job at a construction site early Saturday afternoon when a spark hit dry grass and ignited a fire.

Strong winds quickly spread the fire which is now ranging on a 12-kilometer front to the west and south of the town of Keratea, 50 kilometers (30 miles) south of Athens, burning several houses in the process.

At dusk, the 12 airplanes and two helicopters operating in the area had to be withdrawn and the fire is being fought on the ground, with 115 vehicles and over 300 firefighters taking part.

A home for the elderly was evacuated and its 42 residents moved to a nearby resort, authorities said.

Three smaller fires that also started near Athens late Saturday afternoon have been brought under control. One, in the district of Pallini, just east of the capital, started in dry grass and threatened an ice cream factory, partly burning some outbuildings. Fourteen vans outside the factory went up in flames.

Two other fires broke out in the northwest and southeast corners of the southern Greek Peloponnese peninsula, requiring dozens of fire vehicles to rush to the scenes. They still ran unchecked late Saturday, as did a fire that broke out on the island of Kythnos, in the Aegean Sea. The island does not have a fire brigade detachment and the fire was being fought by private citizens with few means at their disposal.

The blazes were being fought one day before Greeks vote in a national election that could determine whether their indebted nation stays in the euro or leaves in chaos.

The prevailing weather in Greece has been hot and dry recently and although temperatures have decreased somewhat, winds have picked up, leading authorities to issue warnings just hours before the fires broke out. The winds are blowing at a speed exceeding 55 kilometers (34 miles) an hour, with wind gusts reaching 80 kilometers (50 miles). Meteorologists have warned that winds will pick up speed Sunday morning and will not abate somewhat until late on Sunday.