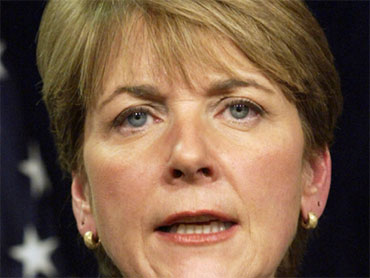 (AP)
Massachusetts State Attorney General Martha Coakley this morning became the first candidate to throw her hat into the ring to replace the late Sen. Ted Kennedy, who died last week after 47 years in office.

The Associated Press reports that a woman representing Coakley picked up the papers from the Secretary of State's office today. She will need 10,000 signatures by October 20 to qualify for the Democratic primary on December 8. Massachusetts Gov. Deval Patrick announced yesterday that the general election for the seat will be on January 19, 2010.

Coakley is the first of several candidates who may seek the seat in what could be a crowded primary. Several Democratic congressmen are said to be considering bids and the Boston Globe reports that attorney Ed O'Reilly, who got 31 percent of the vote in a Democratic primary against Sen. John F. Kerry last year, is "seriously considering" a run as well.

Some are also pushing a member of the Kennedy family to run as well. Kennedy's widow, Vicki, has said she is not interested; but Joseph P. Kennedy II, a former congressman and son of Robert Kennedy, is reportedly thinking about it.

The Globe reports that Coakley has told associates she will run even if a Kennedy family member enters the race.