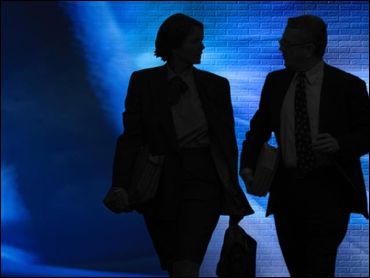 Companies plan to hire slightly more people in the first few months of 2003 than a year ago, even as they remain highly uncertain about the economy, according to a new survey being released Monday.

Twenty percent of the companies surveyed by Manpower Inc. expect to hire more people in the first quarter, while 12 percent plan to cut workers, according to the quarterly survey of 16,000 businesses. The remainder either expected to maintain their staffing levels or were uncertain.

"If you're looking for a job, this doesn't feel that much better," said Jeffrey Joerres, Manpower's chairman and chief executive officer.

Still, when seasonally adjusted, the first quarter's hiring intentions are slightly above the previous two quarters.

Employers also are a bit more optimistic than they were for the first quarter of 2002, when 16 percent expected to hire more workers and 16 percent planned to reduce staff.

The survey's results are consistent with what economist Patrick Anderson expects in the first quarter of 2003.

"The fact that employers are expecting to hire more workers while they're reading headlines indicating that we might be involved in a war is a sign of the remarkable resilience of the U.S. economy," said Anderson, principal of Anderson Economic Group in Lansing, Mich.

He and Joerres say they see companies remaining cautious about their hiring, especially because of the uncertainty about a confrontation with Iraq.

"All bets are off if we go to war," Joerres said.

The survey found the wholesale and retail sector expects to hire more people in the first quarter compared to a year ago, with the strongest job prospects in the Midwest.

Manufacturers of non-durable goods such as food and clothes also expect to hire an increasing number of workers in the first quarter, with 21 percent of companies planning more hiring and 9 percent planning cuts, according to the survey.

Manufacturers in the West will spur stronger hiring activity in that region, after it lagged other areas of the country for the past few quarters. Companies in the West expect to catch up in the first quarter, according to the survey.

Glendale-based Manpower, the nation's largest staffing company, has conducted the survey for 27 years.