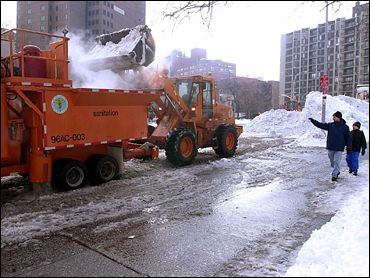 Residents still struggling with mountains of snow in the Northeast and mid-Atlantic could be in for a second headache courtesy of Mother Nature: flooding.

The people in Keyser's Ridge in Maryland's westernmost Garrett County are very worried about the possibility of flooding as the 52-inch snowpack there melts with warmer temperatures and heavy rain on the way, reports CBS News Correspondent Jim Krasula.

"People haven't been out of their house in days," said Jonathan Hook. "Just can't get out of their driveways. There isn't anybody to plow and it's just too heavy to shovel."

"With all of this snow on the ground, the potential is there for serious flooding," said Pennsylvania Emergency Management Agency Director David M. Sanko. "We're hoping that the snow melts slowly, but as history has shown us over and over again, warming temperatures can lead to disaster."

In Harrisburg, where 21 inches of snow fell, city officials took precautions against a repeat of a 1996 flood in which the Susquehanna River rose 10 to 15 feet in a day, causing tens of millions of dollars in damage.

City workers were busy readying pumps, boats, sandbags and other materials that may be needed if another flood hits. And they were racing to clear as much snow as possible from the city's streets so that there would less left to melt.

In Virginia, state emergency officials were telling communities in the Shenandoah Valley and the northern mountains to lock down their belongings, and if possible, move to higher ground.

"It's not often that you know ahead of time about a flood," said Dawn Eischen, a spokeswoman for Virginia's Department of Emergency Management. "With three or four days ahead of time, we're trying to do something right now."

In Alexandria, Va., officials will monitor the Potomac River's levels upstream. If they have any indication that the Potomac could flood the city's historic Old Town district, the city would make sandbags available for home and business owners, said city spokeswoman Barbara Gordon.

In Baltimore and in New Jersey cities, authorities were urging residents to shovel snow away from sewer grates to give rain and melting snow a place to go.

In Bound Brook, N.J., which was devastated by flooding from Tropical Storm Floyd in September 1999, authorities were closely monitoring weather forecasts, and waiting to see how well flood control measures, including a new retaining wall near the Raritan River, would perform this weekend.

In West Virginia, residents living in watersheds protected by dams will not see major flooding because most reservoirs are below capacity and should be able to handle runoff from melting snow and rain, officials said.

Nationally, the death toll from this week's blizzard rose Wednesday to at least 59 people after a preliminary autopsy showed a woman whose body was found Sunday in Newark, Ohio, about 30 miles east of Columbus, died of exposure.