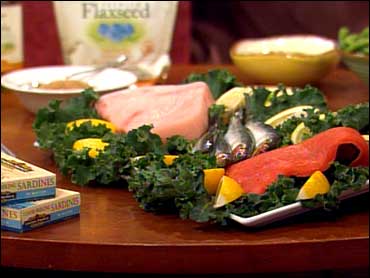 Researchers examined data from 38 studies that tracked patients for up to 30 years, and said most showed there is no cancer protection from omega-3 fatty acids. Although a few studies found some risk reduction for cancers of the breast, prostate and lung, those studies were relatively small and not definitive, said Dr. Catherine MacLean, the lead author and a researcher at the Rand Corp. and Greater Los Angeles Veterans Affairs Healthcare System.

"It doesn't mean that omega-3 fatty acids don't have other health benefits — it's just that reducing cancer risk isn't one of them," MacLean said.

"We know that omega-3 fatty acids are very good for the cardiovascular system. That's really not in question," medical correspondent Dr. Emily Senay

said
on The Early Show Thursday. "We know it can protect against heart disease. We know it can help reduce the risk of sudden death. It can lower triglycerides, lower blood pressure and reduce rheumatoid arthritis symptoms. Not only that, omega-3 fatty acids are found in foods we know are healthy in general.

"So we definitely want to continue to include these in our diets, even if we don't see at this time a benefit to the reduction in cancer."

However, the review is unlikely to be the last word on the issue. Diet is known to play a role in cancer and the researchers evaluated observational studies, which provide mostly circumstantial evidence.

The reviewed studies examined the effects of fish oil — in both pill form and as food — on 11 kinds of cancer, mostly tumors of the breast, colon, lung or prostate.

The 38 studies are too heterogeneous — involving different population groups and different levels of fish oil consumption — to provide a definitive conclusion about whether fish oil reduces cancer risks, said Julie Buring, a chronic disease researcher at Harvard's Brigham and Women's Hospital, who was not involved in the study.

"It doesn't tell us it's unlikely or likely," Buring said. "What is supported is that right now we don't know."

The study appears in Wednesday's Journal of the American Medical Association. It was funded by the government's Agency for Healthcare Research and Quality.

Some animal studies have suggested that fish oil might also reduce cancer risks but the evidence in people is less clear. The potential connection is bolstered by low rates for certain cancers in countries including Japan, where fish consumption is high.

The American Cancer Society recommends fish as a source of protein partly because it doesn't contain high amounts of saturated fats that are in red meat and which some scientists think might increase risks for prostate and colon cancer.

"Even though fish might not reduce cancer risk, it's still important to include it in your diet" because heart disease is the nation's leading killer, Doyle said.