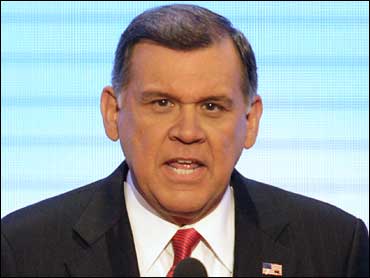 U.S. Sen. Mel Martinez of Florida, who has struggled to boost public support because of his close ties to President George W. Bush, announced Tuesday he will not seek a second term in 2010, saying he wants to spend more time with his family.

The Republican pushed an immigration reform bill that was unpopular with many in his party, and his seat was widely seen as vulnerable in two years. However, Martinez rejected suggestions he faced difficult re-election prospects in a state won last month by Democrat Barack Obama.

"I've faced much tougher obstacles in my life," Martinez said. "My decision is not based on re-election prospects, but on what on what I want to do with the next eight years of my life."

Martinez, 62, was elected in 2004 after serving as the U.S. secretary for Housing and Urban Development during the Bush administration. He served as general chairman of the Republican National Committee for 10 months, resigning in October 2007.

Martinez was born in Cuba. At the age of 15, he fled to America as part of a Catholic humanitarian effort called Operation Pedro Pan. Catholic charitable groups provided Martinez, who was alone and spoke virtually no English, a temporary home at two youth facilities. He then lived with two foster families, with whom he remains close. He was reunited with his family in Orlando in 1966.

In appointing Martinez in 2001, Bush said he was "the embodiment of the American Dream." Martinez said during his announcement that he wants to continue to encourage the hopes and dreams of other Hispanics.

"I always tried very much to be a mentor and role model, particularly to young people," Martinez said.

Martinez played a big role in getting Congress to pass a bill attempting to save Terri Schiavo, the brain-damaged woman at the center of a bitter right-to-die battle.

He also worked to protect oil drilling off Florida's coast, helped secure the release of a Florida woman being held prisoner in Vietnam for political activism and added language to a health care bill the Senate passed that would double Medicare fraud penalties.

Also, as of Sept. 30, Martinez reported only $1.2 million in cash on hand for his possible re-election bid, meaning he would have faced raising millions more to be competitive in Florida's expensive media markets. Earlier this year, Martinez agreed to pay $99,000 in fines for his 2004 campaign's violations of election laws, including accepting more than $313,000 that exceeded legal contribution limits.

Speculation about who would run for Martinez' seat began immediately after his announcement.

Former Gov. Jeb Bush is seriously considering a run and has received e-mails of encouragement from many party and elected officials, according to a former political adviser close to Bush who spoke on condition of anonymity because the former governor is not ready to publicly discuss his plans.

Several Florida congressman also are considered potential candidates, including Democratic Reps. Kendrick Meek and Allen Boyd and Republican Reps. Vern Buchanan, along with about a half dozen other former or current state officials.