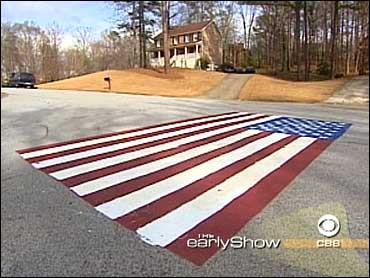 "We just wanted to do it for fun, for the Fourth of July," says Rachel Renbarger.

explains
CBS News Correspondent Jim Acosta, Renbarger and some neighbors painted a 19-by-13-foot American flag on the street in their cul de sac in Duluth, Ga., outside Atlanta.

Since then, kids have played on it, and cars have driven on it.

Then, as Rachel's little sister Leah remarked with a nervous chuckle, "It's (been) crazy."

Suddenly, says Acosta, a star spangled spat began. While Rachel's neighbors would give her an "A for her patriotism, there are some in Duluth who feel she needs a crash course in civics, especially the old rule about Old Glory, that it should never touch the ground.

Don Ogden, a World War II veteran and one-time prisoner of war, argues there's a right way and a wrong way to handle the flag: "You do not let it touch the ground. That was one of the main rules. And yet, they painted the flag on the ground, for Pete's sake."

So he took the matter to the Duluth City Council, which ordered the flag removed.

Choking back tears, Rachel told the council, "We will do whatever it takes to remove it. Me and my sister. I am sorry."

Acosta observes that the apology isn't going over well in Rachel's neighborhood, where one resident has taken to blaring patriotic music out his back window.

"I guess," says neighbor Linda Hutchinson, "he wanted to show his patriotism by playing loud music."

"And he's showing it, all right," said Acosta.

"I guess so!" laughed Hutchinson.

As for Rachel, she says she respects the town's decision: "I learned a lot about the flag code. And how we should use it. And I respect the flag much more now."

While her flag may not fly, concludes Acosta, her interest in her government is just starting to soar.