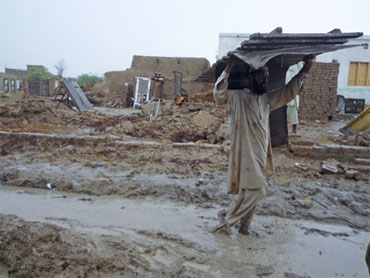 Floodwaters that devastated Pakistan's mountainous northwest surged into the heartland Tuesday, submerging dozens of villages along bloated rivers whose torrents have killed at least 1,500 people and put 100,000 at risk of disease.

CBS News correspondent Richard Roth reports that rescue agencies and other organizations working on the ground say the death toll could already be 3,000 - three times higher than the official government tally.

On Tuesday the World Health Organization said that diarrheal diseases and respiratory infections have increased during the past two days in the flooded regions of Pakistan.

"Mobile clinics are doing what they can," said WHO Spokesperson Fadela Chaib. "They have been able to provide help and medical care for some 15,000 people these recent days."

Fresh rains in the hardest-hit northwest threatened to overwhelm Warsak Dam, the country's third biggest. Rising water levels at the dam prompted disaster officials to ask residents in the northern outskirts of Peshawar city to leave their homes.

"If needed, forced evacuation will be started," said Adnan Khan, a spokesman for the Disaster Management Authority of Khyber Pakhtunkhwa province.

Relief work for some 3.2 million people has been delayed by swamped roads, washed-out bridges and downed communication lines, and survivors have complained about government inaction. Countries (including the U.S.) have pledged assistance to Pakistan.

The Pentagon said today it is sending six helicopters from Afghanistan to help ferry relief supplies or refugees, after Pakistan made a request for helicopters in order to access areas made unreachable by washed-out bridges and damaged roads.

The helicopters were supposed to arrive Tuesday but were delayed by bad weather. The Pentagon says they will fly when the weather clears.

The helicopters will be flown by U.S. crews at the discretion of the Pakistani military. Pakistan publicly resists any U.S. military presence inside the country, but has accepted humanitarian help before.

As floodwaters swept southward into Punjab province, about 3,000 people were marooned in the Kot Addu area after the water breached a protection bank, forcing the army to stage an evacuation using boats and helicopters, said Maj. Farooq Feroz, a military spokesman.

The sudden gusher surprised Fateh Mohammad and his family.

"We just ran away with our children, leaving behind everything. All our possessions are drowned in the water. We have nothing," he said while taking refuge on higher ground.

Water levels were so high in large tracts of Kot Addu and the nearby area of Layyah in the south of the province, that only treetops and uppermost floors of some buildings were visible, footage shot by an Associated Press Television News cameraman on a helicopter showed. People sought refuge on rooftops and tried to bring their livestock up as far as possible.

Punjab is Pakistan's most populous province and home to many of its largest farms. Feroz said many villages in the province's Layyah, Taunsa Sharif, Rajan Pur, Dera Ghazi Khan and other areas had been inundated by water.

In Azakhail, a local businessman was distributing basic food, such as bread and biscuits, to displaced Afghan refugees and other flood victims from his car.

"We are very thankful to the people because they are helping us and providing cooked rice and bread. We did not receive anything from the government, because we are (Afghan) refugees and they are delivering all the things to Pakistanis," said flood victim Saleem Dil Khan.

The United Nation's World Food Program (WFP) has already delivered food to 40,000 people and is aiming to reach 250,000 people by the end of the week.

She estimates 1.8 million Pakistanis will need food aid for at least "a month" because of the flooding.

Aside from farmers, many victims have small businesses that have been destroyed and won't have the means to buy food for their families, Casella said.

In the northwest, new downpours Tuesday added to the misery of the worst flooding in generations. Of the 3.2 million people affected by flooding, 2.5 million live in the northwest, UNICEF spokesman Marco Jimenez told reporters in Geneva.

Around 1,500 people have been killed in the flooding that began last week, said Christian Cardon, a spokesman for the International Committee of the Red Cross. More than 100,000 people at risk of disease and clean water is urgently needed in flood affected areas, said Fadela Chaib, a spokeswoman for the World Health Organization in Geneva.

The northwest is the epicenter of Pakistan's battle against al Qaeda and the Taliban. Alongside military and police operations, the government - with the support of the West - has tried to improve its services and living standards there to blunt the appeal of militancy.

The Pakistani army, which has the helicopters, boats and infrastructure needed for relief work, is delivering food, medicine and tents, as are government agencies and several different political parties and welfare organizations.

But many flood victims were unhappy with the response. About 300 people blocked a major road in the hard-hit Nowshera district Monday to protest at receiving little or no aid, witnesses said.

At least one extremist group - a welfare organization allegedly linked to the Lashkar-e-Taiba militant network - is also helping survivors. The group, Falah-e-Insaniat, has previously helped civilians after other disasters.

The United States, keen for an opportunity to win friends in the region, is providing $10 million dollars in emergency aid. It has also provided rescue boats, water-filtration units, prefabricated steel bridges and thousands of packaged meals.

Other foreign countries, aid groups and the United Nations have promised or are delivering aid.

On Tuesday Canada announced it was sending C$2 million in humanitarian assistance, including C$1.25 million for emergency food assistance through the World Food Program and C$750,000 to the International Federation of the Red Cross and Red Crescent Societies.