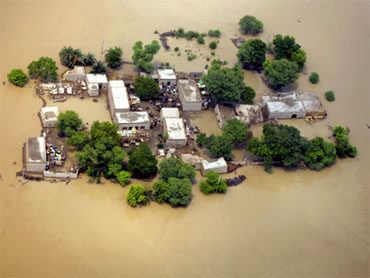 This year's monsoon season has caused the worst flooding in Pakistan in living memory and already killed more than 1,500 people. The U.N. scrambled to provide food and other assistance to some 3.2 million affected people in a nation already struggling with an Islamist militancy and a poor economy.

CBS News correspondent Richard Roth reports that rescue agencies and other organizations working on the ground say the death toll could already be 3,000.

After causing huge destruction in Pakistan's volatile northwest, floodwaters deluged villages and some urban centers in Punjab, the richest and most populous province. The army used boats and helicopters to move stranded villagers in the area to higher ground.

Water levels were so high in large tracts of Kot Addu and the nearby area of Layyah in the south of the province, that only treetops and uppermost floors of some buildings were visible.

Military spokesman Maj. Gen. Nadir Zeb told reporters at least 30,000 people have been rescued from flood-hit zones in Kot Addu and nearby areas over the previous 72 hours. He warned that more flooding was expected as more rains were forecast in the next few days.

"People must cooperate with us, and they must leave those areas where floods are going to hit," he said.

Monsoon season in Pakistan usually lasts about three months, through mid-September. In a typical year, the country gets an average 137 mm (5.4 inches) worth of rainfall during the monsoon season. This year, it already has received 160 mm (6.3 inches), said Muhammad Hanif, head of the National Weather Forecasting Center in Islamabad.

The rains are falling about 25 to 30 percent above normal rates, Hanif said. The northwest, which has been hit the hardest, experienced "once-in-a-century" rains, and can expect more wet weather in coming days, though at normal levels that should allow some recovery. The vast majority of deaths have been reported in that region.

Punjab in the country's east and Sindh province in the south, however, should expect significant rainfall, he said.

At least 47 people had been killed in Punjab since flooding began in late July, Pakistan's National Disaster Management Authority said. Nearly 1,000 villages have been affected and some 15,000 houses destroyed in the province, the U.N. said.

The rush of muddy water over river banks in Punjab threatened to destroy vast stretches of crops that make the province Pakistan's breadbasket. Numerous crops have also been lost in the northwest.

The loss of farm produce is one reason the U.N. has warned of serious food shortages, and the World Food Program has estimated that 1.8 million people will need to be fed over the next month.

Rescue workers have struggled to deliver aid because of washed-out bridges and roads and downed communication lines.

But many flood victims have complained that aid is not reaching them fast enough or at all. That anger could spread as floodwaters threaten Sindh province. Authorities expect several districts will be hit by rising waters in Sindh, which is on track to experience its worst flooding in 34 years, the U.N. said.