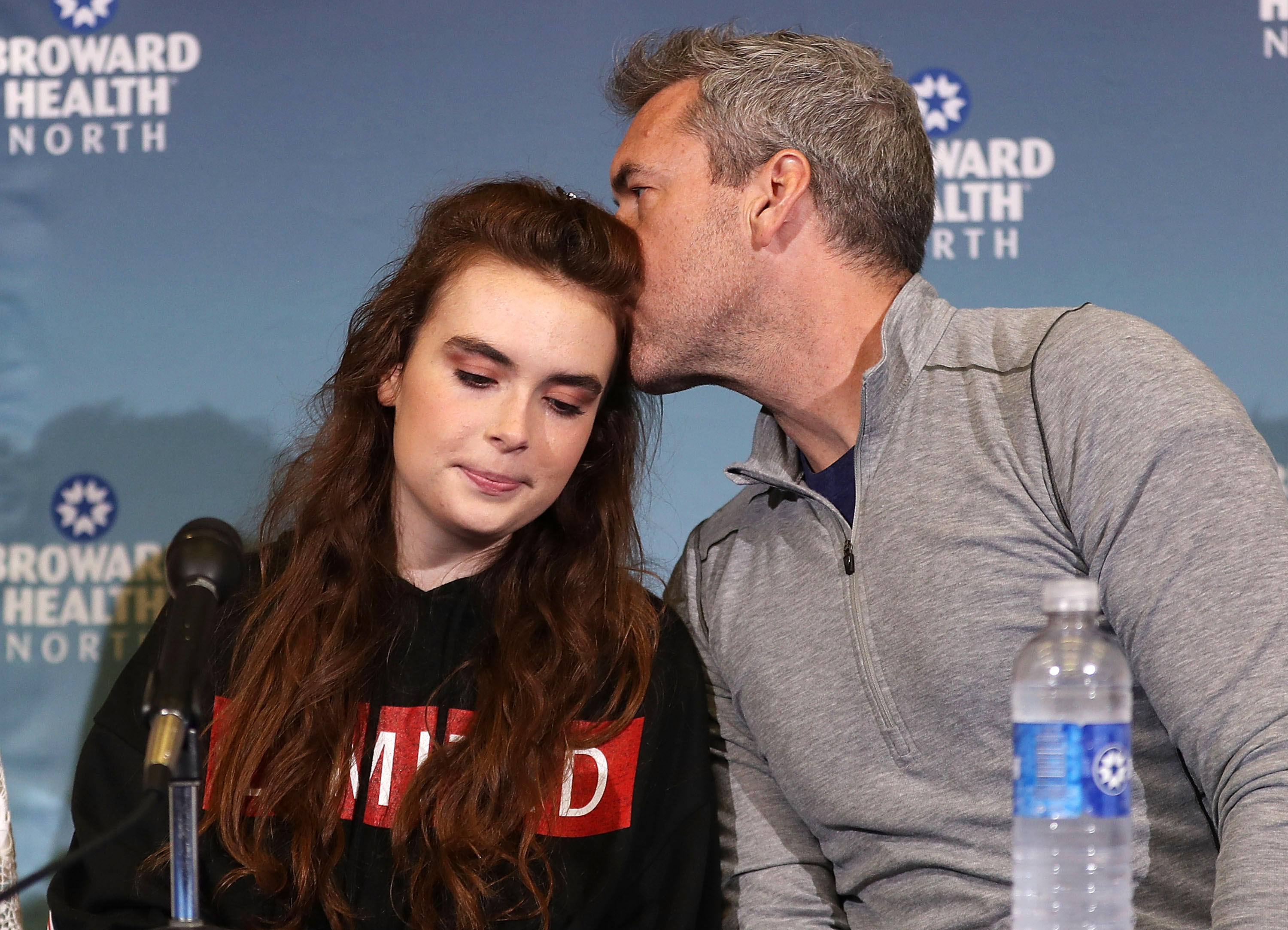 PARKLAND, Fla. -- A tearful student who was wounded in the Florida school shooting thanked the doctors and first responders who helped her and said Monday she is making a full recovery. Speaking at a hospital news conference, Maddy Wilford, 17, said "it's times like these when I know that we need to stick together."

When rescuers first found Wilford inside the school, they thought she was dead. She was pale and unresponsive, bleeding heavily from bullet wounds to her chest, abdomen and arm. A fire-rescue lieutenant was under orders to take her to a hospital 30 miles away but made what doctors called a life-saving split-second decision and took her to Broward Health North hospital, less than 10 miles from the school, that had practiced an active shooter drill several months earlier.

Wilford underwent three surgeries since the Feb. 14 shooting at Marjory Stoneman Douglas High School in Parkland, Florida, that killed 17 people. She appeared at the news conference with her parents and with doctors and first responders who helped her.

Flanked by her mother and father, Wilford said that with "all the love that's been passed around, I definitely wouldn't be here without it."

Some bullet fragments remain inside her.

The news conference came a day after a line of students and their parents wrapped around the school. Several thousand people entered the campus for the first time since the massacre.

They walked solemnly but resolutely Sunday through gates that had been locked to all but law enforcement and school officials since the Valentine's Day shooting, set to collect backpacks and other belongings left behind as they fled. To enter, they passed within feet of the three-story building where the shooting happened. It's now cordoned off by a chain link fence covered with banners from other schools showing their solidarity.

The 3,200-student school reopens Wednesday and administrators said families would get phone calls about details later. Sunday was a day to ease into the return.

Israel has come under withering scrutiny after the revelation last week that deputy Scot Peterson, the school's assigned security officer, was nearby when the shooting began but did not go into the building to confront the suspect during the attack. The sheriff's office is also facing a backlash for apparently mishandling some of the 18 tipster calls related to the suspected shooter. The tips were among a series of what authorities now describe as the clearest missed warning signs that Nikolas Cruz, who had a history of disturbing behavior, posed a serious threat.

Israel defended his leadership Sunday and said investigators were looking into claims that three other deputies were on the scene but failed to enter the school when the chance to save lives still existed. To date, the investigation has pointed to only one deputy being on school grounds while the killer was present, he told CNN.

Israel also labeled as "absolutely untrue" reports that the deputies waited outside even though children were inside the building needing urgent medical treatment.

He insisted that lapses were being investigated. He told CNN that a deputy who responded to a Nov. 30 call referring to Cruz, 19, as a "school shooter in the making" was being investigated by internal affairs for not filing a report and had been placed on restrictive duty.

"There needed to be report. And that's what we are looking into - that a report needed to be completed, it needed to be forwarded to either Homeland Security or a violent crimes unit," Israel said.

The FBI has acknowledged that it failed to investigate the tip about Cruz that the agency received on Jan. 5.