The Pittsburgh Penguins had more shots, more power-play chances and more scoring opportunities than the Philadelphia Flyers on Tuesday night. The Flyers had more goals, though

Rod Brind'Amour scored one third-period goal and set up another as the Flyers beat the Penguins 4-1 for a rare win in Pittsburgh.

The Flyers won for only the second time in their last 20 games at Civic Arena. They are 2-13-5 during that span.

"You (media) guys make a bigger deal out of that than we do," said Flyers captain Eric Lindros. "We're trying to win games no matter what building we're in. It isn't like we come into Pittsburgh and there's this big cloud over our heads."

The Flyers rode the goaltending of John Vanbiesbrouck and a penalty-killing unit that wiped out seven power plays for a total of 14 minutes against the NHL's No. 1 power play.

"It obviously wasn't in the game plan to come out, take a lot of penalties and give them a lot of power plays," Vanbiesbrouck said.

The Penguins were on the power play for 12 of the game's first 25 minutes and didn't score.

"It was part good killing on their part, part our inability to execute and a big part was Vanbiesbrouck," Pittsburgh coach Kevin Constantine said.

Vanbiesbrouck broke a personal 0-3-2 streak and redeemed himself for a bad game in Pittsburgh two weeks ago. In that game, The Flyers blew a 3-0 lead and

"I think everyone had a sense of purpose tonight," defenseman Eric Desjardins said. "I know Johnny came out real strong."

Brind'Amour broke a 1-1 tie at 9:30 of the third, stuffing Valeri Zelepukin's pass in at the side of the net for his eighth goal. In 41 career games against Pittsburgh, Brind'Amour has 53 points.

Brind'Amour won a faceoff against Dan Kesa on a power play at 15:38 of the third and Eric Desjardins' shot from the point deflected past Tom Barrasso.

Lindros came out of the penalty box after serving a double-minor for high sticking and helped set up the game's first goal. Lindros beat defenseman Kevin Hatcher to the puck behind the net and centered to Keith Jones, who scored his fourth goal at 6:34 of the second.

Jones has two goals in two games with the Flyers since he was acquired from Colorado last Thursday.

Brad Werenka, the victim of Lindros' high stick, made a good play at the left point that led to the tying goal at 9:08 of the second. Werenka kept the puck in the zone and Robert Lang fired in German Titov's pass for his seventh goal.

John LeClair scored into the open net with 1:07 left in the third for his 11th goal. 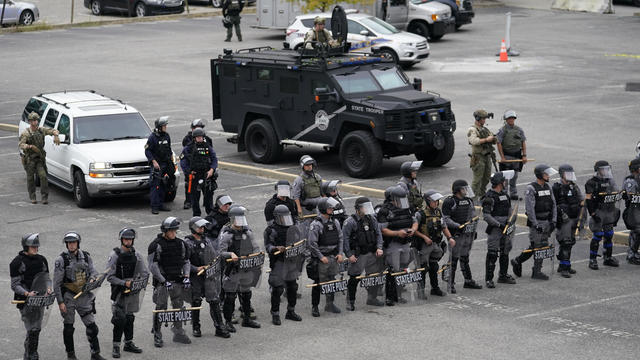