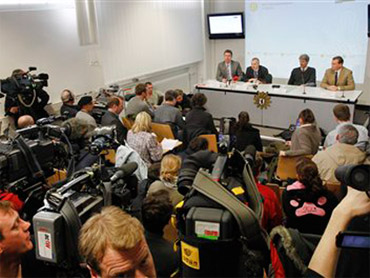 A man who admits to taking part in a brazen daylight raid on a poker tournament in Berlin surrendered to authorities and identified three accomplices who remain on the run, officials said Wednesday.

Authorities had been hunting since March 6 for four suspects who, armed with a revolver and a machete, stormed into the tournament at a downtown Berlin hotel and made off with euro242,000 ($332,000) in jackpot money.

Images of the masked men were captured on surveillance cameras.

The 21-year-old German turned himself in on Monday. Officials declined to give further details about him.

During questioning, he admitted to his involvement and named his three accomplices, prosecutor Sjors Kamstra told reporters.

Arrest warrants were issued for the three. Their Berlin addresses were searched on Tuesday, but they weren't there and "we assume they're on the run," investigator Stefan Teller said. Officials wouldn't speculate on where they might be.

Authorities issued photos of the three - Ahmad el-Awayti, 20, of undetermined nationality; Jihad Chetwie, a 19-year-old German; and Mustafa Ucarkus, a 20-year-old Turkish citizen. They said they did not have further suspects.

All three already are known to German police in connection with previous suspected offenses including robbery and bodily harm.

Officials said the car the robbers used, a Mercedes, has now been found. The money, however, hasn't yet been recovered.

The man who turned himself in has told officials that "the money was divided up immediately after the crime," said Frank Heller, a prosecutor.

He has indicated that he will pay back his share of the loot via his lawyer, but it is currently "with a third party," Heller added, without elaborating.

"And when he saw that the guards didn't have guns, they decided that they had a chance."

CBS News Correspondent Richard Roth reported last week that during the heist inside the poker room, panic spread among the participants and at least seven people were injured while trying to escape. Some dove under card tables, while others raced for the exit, Roth reports.

One robber with a machete barely got past a security guard. Another robber was nabbed and brought to the floor, then let go when companions came to his aid and threatened the guard, reports Roth.

Following the brazen daylight heist, the robbers escaped on foot through a nearby shopping mall - not wearing black masks any longer - and finally fled in a getaway car.

Roth reports that once the robbers escaped, play resumed where it left off, with American Kevin MacPhee winning the tournament.

Speaking via satellite to "The Early Show," MacPhee said Monday morning that he, "heard some screaming and some yelling" and his "first instinct was just to get down on the ground."

MacPhee told "Early Show" co-anchor Maggie Rodriguez that he assumed "insurance was taking care of" the money stolen. "Yeah, I'll get all my money," he said.