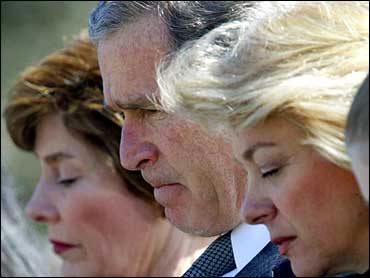 They were seven unique people, united by their passion for space — and, of course, by death.

As CBS News Anchor Dan Rather reports, the tightly knit NASA family gathered to say farewell to seven of their own and to offer for them a final prayer.

"I know you're listening, please know you're in our hearts and we will always smile when we think of you," said Captain Kent Rominger, U.S. Navy Chief of Astronauts.

In personal anecdotes that sometimes drew wistful laughter from the audience, the Columbia astronauts were recalled Tuesday by those who trained them and those they served — including President Bush, who with others at the memorial service at the Space Center tried to sketch in the personalities and quirks behind the smiling NASA photographs of the doomed shuttle crew.

At the astronauts' Christmas party, Rominger recalled that the Columbia crew was "the life of the party." But on the job, he said, they were tireless professionals who "functioned flawlessly together."

Air Force Col. Rick D. Husband, shuttle commander, 45, was "a boy of four when he first thought of being an astronaut," Mr. Bush said. "As a man and having become an astronaut, he found it was even more important to love his family and serve his Lord."

Rominger said it was Husband's gifted leadership that "molded seven individuals from different parts of the world, from different backgrounds and religious beliefs, into an incredibly tight-knit family,"

Columbia pilot William C. McCool, 41, was known by friends "as the most steady and dependable of men," an Eagle Scout and fearless test pilot, Bush said.

Ilan Ramon, 48, the much-decorated Israeli air force colonel and hero, "was a patriot, the devoted son of a Holocaust survivor" who "served his country in two wars" and ultimately yearned for peace, Bush said.

Navy flight surgeon David Brown, 46, was "first drawn to the stars as a little boy with a telescope in his backyard," Bush said. As a boy, Brown thought of astronauts as "movie stars" and "grew up to be a physician; an aviator, who could land on the deck of a carrier in the middle of the night; and a shuttle astronaut," the president said.

Rominger noted that Brown was a lifelong bachelor, and "as such, he was in constant search for food" — another comment that produced ripples of laughter from the audience.

Navy flight surgeon Laurel Clark, 41, was "a physician and a flight surgeon who loved adventure, loved her work, loved her husband and her son," Mr. Bush said. He quoted her as believing that "life continues a lot of places, and life is a magical thing."'

Rominger said Clark wore "a perpetual smile," and "a different pastel shirt for each day of the week."

Payload commander Michael P. Anderson, 43, was, said Mr. Bush, "a role model, especially for his two daughters and for the many children he spoke to in schools."

"'If this thing doesn't come out right, don't worry about me; I'm just going on higher,"' Mr. Bush quoted Anderson as telling his minister.

Mission specialist Kalpana Chawla, 41, "left India as a student, but she would see the nation of her birth, all of it, from hundreds of miles above," Mr. Bush said. "When the sad news reached her hometown," Mr. Bush said, "an administrator at her high school recalled, `She always said she wanted to reach the stars."'

She was known for her "extraordinary kindness and her striving for perfection," said Rominger, adding: "Flying was her passion."

As Rather reports, Mr. Bush consoled the astronaut's families, who say they want manned space flight to continue. He assured them it shall.

"America's space program will go on. We find the best among us, send them forth into unmapped darkness, pray they will return," said Mr. Bush.

Yet, said the president, some explorers do not return, and fate settles unfairly on a few.

The memorial service, held near NASA's mission control — where the tragedy was first realized — marked a break in the hunt for an explanation of the shuttle accident.

That investigation has focused early attention on the possibility that a chunk of the lining of the shuttle's external fuel tank broke off during liftoff, striking and damaging the delicate thermal tiles that protect the shuttle during its return to Earth.

NASA is collecting debris from the doomed craft, as well as scrutinizing its final electronic instrument transmissions. The agency is also reviewing tape of the shuttle's launch to see if NASA experts erred in their determination, made four days before the disaster, that the possible tile damage posed no danger.

Meanwhile, the search for clues from the shuttle's debris continued, covering an area larger than West Virginia. Investigators made an important discovery, locating the spacecraft's nose cone in a heavily wooded area of eastern Texas.

So far the search has covered Texas and Louisiana. But NASA shuttle program manager Ron Dittemore said NASA was also interested in any pieces that may have fallen from Columbia as far west as New Mexico, Arizona or California.

The reason for that interest, CBS News space consultant Bill Harwood reports, is that the shuttle began beaming back troubling instrument readings as it flew over California.

With three astronauts on the international space station set for a space shuttle ride home in the coming months, finding the cause of the crash and fixing it are obvious priorities for NASA. But the agency has said its first aim is to recover the astronauts' remains, for the families' sakes.

The memorial was only the latest in a stream of tributes to the lost astronauts. The Senate Monday morning quickly passed a resolution expressing condolences at the loss of the Columbia, then adjourned in respect to the astronauts. Smaller memorials have been held for individual astronauts. Mourners have placed flowers at NASA facilities.