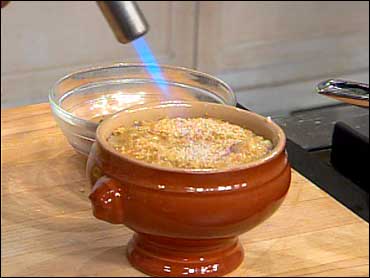 If you're suffering from the winter blues, there may be some foods that can boost your mood.

She says your diet can have a significant impact on your mood - though she stresses she's not referring to "emotional eating" - when someone eats as a result of stress. This is, says Ashton, "about maximizing your diet to help you have more energy and less irritable."

There are some key rules to live by to help control your mind and help you stay in a "good mood" - among them, keeping your blood sugars steady, which means eating less refined sugars and starches that can spike it up.

Oatmeal is a great winter option because it's warming -- it's got whole grains and fiber, which helps stabilize blood sugar. The carbs in oatmeal helps trigger the release of serotonin, which helps relax you. Also it's often fortified with selenium, which may help ease anxiety and depression and make you less tired.

People can get depressed because they don't get any sun during the long winter months. But, Vitamin D can help combat the blues. Good sources include fish, eggs and milk.

There's research linking Vitamin D deficiency and depression -- so make sure you get enough Vitamin D. It can be good for your brain and mood. It can also keep colds and the flu away, which should make you feel better than being stuck on a couch and miserable. One study found that people who took Vitamin D supplements were three times less likely to report cold and flu symptoms. Most children (7 out of 10) are deficient in Vitamin D -- it's recommended that they get 400 IUS daily.