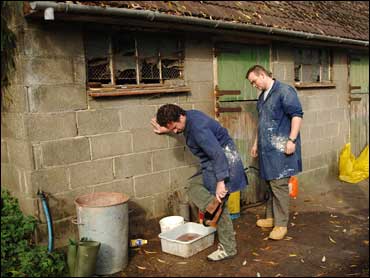 The British government said Friday cattle slaughtered on a second farm southwest of London have tested positive for foot-and-mouth disease.

The second case was detected within a surveillance zone set up when foot-and-mouth was discovered Wednesday in cattle grazing near Egham in the county of Surrey, about 10 miles from the laboratory linked to a previous outbreak.

Initial test results led officials to say Thursday that the latest foot-and-mouth outbreak is the same strain as last month's, which gave farmers hope the disease could be contained in a small region.

If the strain turns out to be different, Britain's farmers - who have already suffered from floods and another outbreak over the summer - could lose more of their livestock as officials hunt for a source.

Following a larger outbreak in 2001, thousands of cattle, sheep and pigs carcasses were burned on large pyres across the country and the farming industry lost millions revenue.

A nationwide ban for the movement of livestock was put in effect on Wednesday.

British media reported Friday that officials in Wales and Scotland had eased the restrictions, allowing farmers to take livestock directly to slaughter. Any other movement of farm animals was still prohibited.

The EU has also suspended all British livestock movement, and ditched a plan to re-allow the export of British meat to other European countries in November.

"The whole of England is back at a standstill. This is very bad news for the British farming industry," Sally Shepherd, a farmer in Surrey, told the British Broadcasting Corp.

Restrictions on the cattle industry had only been lifted for five days, when the latest case of foot-and-mouth was discovered in cattle grazing in the county of Surrey, about 10 miles from the laboratory that was linked to the August outbreak.

The government denied claims that the country's chief veterinarian Debby Reynolds was pressured by political and economic interests to lift restrictions early following the first outbreak of the disease in August.

"This was a decision that was made on the basis of scientific evidence," Prime Minister Gordon Brown's official spokesman Michael Ellam told reporters Thursday.

The government said it waited 30 days after confirming the last known case of the disease before giving the all clear.

Foot-and-mouth has an incubation period of between two and 14 days in animals. But it can survive for up to 50 days in water and can be transferred by tractors and other farm vehicles.

Some experts said the government should vaccinate animals to prevent the spread, not simply rely on slaughter.

"You attempted to control this by slaughter policy alone, it clearly has failed," said Robin Maynard, a spokesman for the Soil Association, an independent group that certifies organic farms.

But if the government decides to vaccinate the animals, it would take longer to resume crucial meat exports to the EU.

The government set up a six-mile containment zone around the farm near Egham that includes Heathrow Airport and Queen Elizabeth II's Windsor Castle. Egham is 25 miles from London.

The August outbreak was centered near the government-funded Institute for Animal Health, a diagnostic laboratory, and vaccine maker Merial Animal Health, a British unit of the U.S.-French pharmaceutical firm Merial Ltd.

The government imposed a nationwide ban on all livestock movement, and ordered the slaughter of 300 cattle and pigs in the affected area, Reynolds said.

The European Union imposed its own ban on livestock movements from Britain.