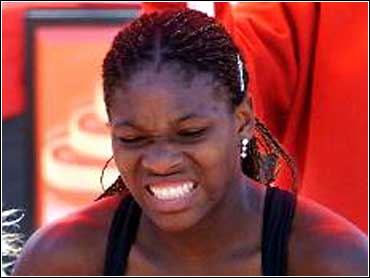 Martina Hingis didn't downplay her own performance after she was handed the du Maurier Open title Sunday when Serena Williams retired with an injury.

Hingis, the defending champion, led 0-6, 6-3, 3-0 when Williams informed chair umpire Anne Lasserre-Ullrich of France she was unable to continue due to an injury to her left foot.

The Swiss ace had been overwhelmed by Williams' rocket shots in the opening set, but turned the tables by forcing the bigger, stronger American to play longer points in the second.

"She showed her power and strength in the first set and, in the second I tried to make her play the points, make her make a good shot, and show her I was there," said Hingis, who won the tournament last year when it was played in Toronto.

"The more balls she has to play, the harder it is. And with her body, it's hard to play two weeks in a row on hardcourts."

The fourth-seeded Williams received treatment at courtside after the second set, but was limping and showed little movement on the court in the third. The official medical report said she had sesamoditis an inflammation of a small bone on the base of her left foot.

Williams is to have the injury examined by her orthopedic surgeon in Florida this week.

"I don't think my foot had anything to do with it," Williams said of the defeat. "I think Martina started playing better and started doing different things.

"Having her move me around more was not what I wanted to do today. Any other day, great. But not today."

Williams said she first felt a twinge of pain in the foot while winning a tournament in Los Angeles last week, where she beat Hingis in the semifinals. She said the pain returned during her semifinal win Saturday night over Arantxa Sanchez-Vicario.

"I felt it overnight while I was sleeping and it hurts now just sitting here," said Williams, who added that she tried to hit winners quickly to get the match over with.

"I didn't want to put pressure on the foot. That's the way I think I should play from now on as if I've been injured so I can keep playing like that."

The statistics were revealing.

"When I first walked out onto the court I thought, `Wow, what a great crowd,'" Hingis said of the packed du Maurier Stadium grandstands. "But then, it was like Formula One the shots were zooming by me, especially on returns of my first serve.

"I couldn't really see where she was hitting. But then I started reading her better and that was the key in the second set."

Hings returned with partner Nathalie Tauziat to win the doubles 6-3, 3-6, 6-4 over the top-seeded pair of Julie Halard-Decugis and Ai Sugiyama.

Williams is confident the injury will not keep her out of next week's U.S. Open in New York, where she is defending champion, but where Hingis, ranked No. 1 in the world, will be top-seeded.

Williams was the third player injured during the du Maurier, which had already seen Monica Seles and Mary Pierce withdraw with injuries before the tournament started.

Second-seeded Lindsay Davenport retired from her quarterfinal match with Magdalena Maleeva on Friday, also with a left foot injury, and Halard-Decugis, seeded 10th, quit after the third round with a lower back injury.

The victory also stopped the Williams family winning streak. Serena and her older sister Venus had won four tournaments in a row between them and had not lost to anyone except one another in 29 consecutive matches. Venus did not play at the du Maurier.

Despite the loss, Serena will jump from No. 7 to No. 5 in world rankings. Venus is ranked third.