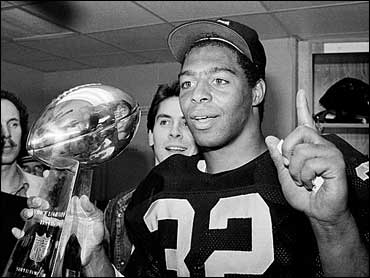 Marcus Allen was elected to the Pro Football Hall of Fame on Saturday, a day before the team he left during a bitter feud returns to the Super Bowl.

The former Oakland Raiders running back was chosen for the Class of 2003 in his first year of eligibility. He will be joined by Elvin Bethea, Joe DeLamielleure, James Lofton and Hank Stram, who went in as a seniors candidate.

Allen was the first player in NFL history to rush for more than 10,000 yards and catch passes for 5,000 more. He finished his career with 12,243 yards rushing and 5,411 receiving. He scored 145 touchdowns and was regarded as one of the game's best goal-line and short yardage runners.

Most of that production came with the Raiders. He led Oakland to the 1984 Super Bowl title, the team's last, and was voted the game's MVP for his 191 yards and two touchdowns.

The next season Allen won the league MVP award when he ran for an NFL-high 1,759 yards and 11 TDs. He also caught 67 passes for 555 yards and three more TDs.

But he is barely acknowledged by the Raiders. He was dismissed following an ugly contract fight with owner Al Davis, who called Allen "a cancer on the team." After 11 years with the Raiders, he moved on to the Kansas City Chiefs for four more productive seasons.

Bethea, a defensive end, played 16 seasons, all with the Houston Oilers. He made the Pro Bowl eight times and led the team in sacks six times, finishing his career with 105.

DeLamielleure played 13 seasons with Buffalo and Cleveland and was a starter from the first game in his rookie season. He was the lead blocker for Hall of Famer O.J. Simpson, who became the NFL's first 2,000-yard rusher in 1973.

Lofton played 16 seasons at wide receiver and had more than 50 catches in a season nine times. He was the first NFL player to score a touchdown in three different decades and finished his career with 764 catches for 14,004 yards and 75 touchdowns.

Stram coached for 17 seasons, starting with the AFL's Dallas Texans, who moved to Kansas City. He was with the franchise from 1960-74 and then coached in New Orleans for two more seasons. He led the Chiefs to two Super Bowls, losing the first one to Green Bay and then beating Minnesota after the 1969 season.

Stram went into the Hall of Fame as a seniors candidate, a separate category for nominees who completed 70 percent of their career more 25 years ago.

Enshrinement of the class of 2003 is scheduled for Aug. 3 at the Hall of Fame in Canton, Ohio.

Prior to Sunday's Super Bowl between the Raiders and Tampa Bay, Larry Csonka and other members of the undefeated 1972 Miami Dolphins will be honored at the coin toss.

"We've got a press conference and two practices," Csonka mused. "My, how times have changed. When I played, three days before the game we didn't know what hotel we'd be in."

That was a simpler, less-complicated time in the NFL, a time that Lynn Swann said is long gone. All you have to do is watch the players. "I don't know if I could play today at the rate they go, the speed and power they have," Swann said.

Hall of Famers Csonka and Swann joined Emmitt Smith and Tom Brady on a panel of Super Bowl MVPs to reminisce about their big games. Brady had the least trouble remembering the details because his MVP award came just a year ago when the New England Patriots defeated the St. Louis Rams.

He talked about the frantic, last-minute drive to Adam Vinatieri's 48-yard field goal that won the game as time ran out.

The Patriots ran a conservative offense that was not big on taking chances. As Brady prepared to take the field, he turned to Charlie Weis, the offensive coordinator and quarterbacks coach, and asked if they were going to go for it or sit back and take their chances in overtime.

The word came from head coach Bill Belichick to try for some yards but Weis added a word of caution since New England was deep in its own end. "Be careful with the ball," he said.

Then Drew Bledsoe, who had lost his job to Brady, offered some advice of his own. "Drew said, `Don't mess with it. Go out and sling it."' Brady said.

Music to a quarterback's ears. Brady came out throwing. Ninety seconds later, the Pats won the game and he was the MVP.

"You compete in everything, every day right from the time you're doing gassers in training camp," Brady said. "You want to see how good you are. That's what motivates me and I hope will allow me to win a few more of these."

Swann was on four Super Bowl championship teams with the Pittsburgh Steelers, a dynasty that dominated his era. There was nothing wrong with that, as far as he was concerned.

"I played nine years. If I won nine, that's all right with me," he said. "The heck with everybody else. But for the sport, I know parity is good."

Smith won his MVP award in 1993 with Dallas in the midst of three championships in four years.

"It was definitely a wonderful experience," the NFL's all-time rushing leader said. "If the Cowboys had released me a month or two ago, maybe I'd be here with Tampa Bay. I'm glad I'm still with the 'Boys. I'm glad I've got a job."