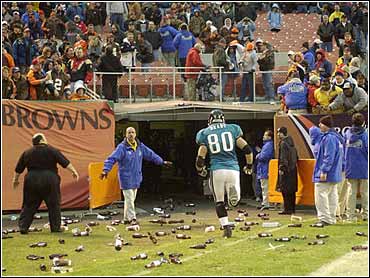 Enraged Cleveland Browns fans pelted the field with thousands of plastic beer bottles when officials overturned a last-minute call Sunday, striking the players and forcing them to run for cover.

The game was stopped for about a half-hour with 48 seconds to play because of the violence, sparked by an instant-replay call that helped the Jacksonville Jaguars win 15-10.

Most of the bottles were plastic, but many were filled with beer. The Jaguars and Browns had to dodge flying objects as they sprinted to their locker rooms. Officials were doused with beer and cups of ice.

"We feared for our lives," Jaguars wide receiver Jimmy Smith said. "We were just trying to dodge as many beer bottles as we could. It was like dodging bullets."

The Browns also were under attack.

"I was definitely looking over my shoulder for bottles flying," quarterback Tim Couch said.

Nobody was seriously hurt. Some fans tried to run onto the field but they were stopped by security. Police made arrests but exact numbers were not immediately released.

"I've never seen a game, heard of a game anything like this," Browns coach Butch Davis said. "I know the fans were upset, but our guys were getting hit along with the Jaguars and the officials."

The fans' ugly behavior came after the Browns had a first down at Jacksonville's 9-yard line taken away despite running a play before the officials reviewed the previous play.

Couch had apparently completed a fourth-and-2 pass to wide receiver Quincy time-out with 1:08 remaining, and the Browns, who were out of time-outs, quickly rushed to the line of scrimmage.

On first down, Couch spiked the ball with 48 seconds to go, and was headed to the sideline when the officials began to discuss Morgan's catch. After several confusing minutes, referee Terry McAulay announced that the officials were reviewing the play. When McAulay finally emerged from the TV review monitor, he announced that Morgan did not catch the ball.

Morgan was sure he caught the pass.

"I hit the ground, got up and spit the ball on the ground," the rookie said.

As Cleveland's bench erupted in protest, Browns fans in the "Dawg Pound" bleacher section closest to the play began hurling bottles and other objects from the stands.

Nearly 30 minutes after ordering players off the field, officials resumed play. Jacksonville's offense returned intact while the Browns sent three offensive players out with their defense since some players had already undressed.

About 5,000 fans were still in the stadium to see Brunell take two snaps and run out the clock.