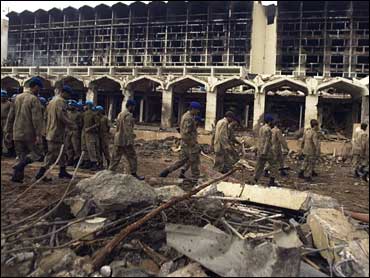 This bombing of the Marriot hotel in Islamabad over the weekend was aimed at least in part at America.

The long cozy relationship between the United States and Pervez Mushariff was over and Islamist radicals were determined to send a message to the U.S. and the new Pakistani President; Asif Ali Zadari.

This war in Afghanistan is now being fought in Pakistan as well. Jihadists have found refuge in Pakistan and converts too.

Any friend of America is their enemy. So Zadari has a mess on his hands.

Terrorists freely flow from his lawless border areas into and out of Afghanistan.

For the past month, American troops have actually fought those terrorists on Pakistani soil. Many in Pakistan are outraged.

So Zadari has ordered his army to fire on American soldiers found fighting in Pakistan.

Mind you the terrorists are really a common enemy. But, local politics trump U.S. foreign policy.

And all it cost the terrorists was a little blood.