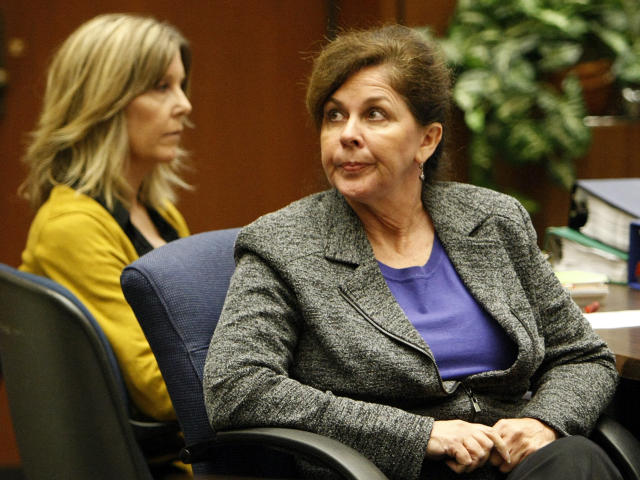 LOS ANGELES  - A former official in the Los Angeles suburb of Bell was convicted of corruption Monday in a case that drove the city to the brink of bankruptcy.

She had faced as much as 16 years in prison if convicted on all counts. However, Spaccia was found not guilty of hiding a public document involving the police chief's contract. Los Angeles County Superior Court Judge Kathleen Kennedy also declared a mistrial on another count after jurors deadlocked.

Spaccia said nothing as the verdict was read, but her mother and sister looked on, sobbing. She was taken away in handcuffs pending her sentencing next month.

Prosecutors had charged that Spaccia was deeply involved in approving enormous salaries for officials in a city where one in four residents lives below the federal poverty line - a city they described as suffering "corruption on steroids."

Spaccia, 55, testified that she knew she was making too much money when her salary exceeded $340,000 but maintained it wasn't criminal.

She was left to stand trial alone after her former boss, Robert Rizzo, pleaded no contest to 69 corruption charges.

"I felt she is a good person. She has a family like everybody else. But she had duties," juror Marco Islas said outside court.

Spaccia began her job in 2003, and at first it appeared form the evidence that she was following Rizzo's orders "like a brainwash," Islas said.

"But at the end, she knew what she was doing," he added.

By the end of her tenure, prosecutors said, Spaccia was making $564,000 a year in salary and other compensation. Rizzo was giving himself an annual salary and benefits package of $1.2 million. His $800,000 in wages alone was double that of the president of the United States.

In a plea deal, Rizzo acknowledged taking more than $5 million from the city. He agreed to testify against Spaccia but the prosecution chose not to call him as a witness.

In her testimony, Spaccia depicted Rizzo as a brilliant city manager who morphed into a greedy manipulator of people and money.

She pointed out that she was absent when most of the problems occurred, having taken months off to care for a dying grandfather and her son who was seriously injured in a motorcycle accident.

She said she became despondent and contemplated suicide after the Bell scandal broke, suffered a mental breakdown and was hospitalized for a time.

Spaccia described city employees operating under the thumb of Rizzo who controlled all contracts and salaries. Former police chief Randy Adams testified that he was surprised when his demand for a salary of $457,000 a year was granted by Rizzo without protest.

Adams depicted Spaccia as a powerless functionary who carried out Rizzo's orders.

He also identified a 2009 email exchange in which he told Spaccia, "I am looking forward to seeing you and taking all of Bell's money."

She responded, "LOL. Well you can take your share of the pie. Just like us. We will all get fat together."

She then referred to what she said was a favorite saying of Rizzo - "Pigs get fat; hogs get slaughtered" - and added they shouldn't be hogs, according to the email.

Adams testified that the comments were made in jest and had been blown out of proportion. He was not charged in the case.

Authorities said Rizzo also paid most members of the City Council about $100,000 a year, even though the panel met only about twice a month to handle matters for the city of about 35,000 people.

Last March, five former Bell City Council members were convicted of fraud charges after authorities said they paid themselves salaries for sitting on boards and commissions that did no work and existed only to pay the defendants.

Rizzo, 59, is scheduled to be sentenced March 12 and could be sent to prison for 10 to 12 years. He also is under investigation by federal authorities in a tax case.