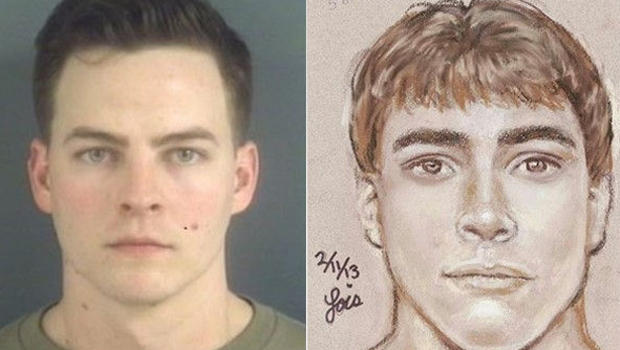 HOUSTON -- A Fort Bragg paratrooper from Texas has been charged in a 2013 sexual assault near Houston in which the victim, naked and bleeding, walked to a movie theater for help. The Harris County Sheriff's Office on Tuesday announced DNA evidence led to the arrest of Pvt. 1st Class Levi Austin Goss in North Carolina.

Goss, of Port Neches, is charged with aggravated sexual assault of a child and aggravated kidnapping.

A 16-year-old girl was walking near a Cypress high school when she was grabbed by a masked man, hit in the head with an ax, dragged to a field and raped. After the assailant struck her in the head again with the ax, the victim played dead for several minutes until he left, reports CBS affiliate KHOU.

After she walked for help, she was rushed to the hospital in critical condition where she gave deputies a description of her attacker, the station reports. Authorities released a sketch, but it didn't lead to an arrest at the time.

Investigators also found a bloody shirt in the bathroom of a nearby gas station. An attendant told them a man was wearing the shirt when he entered the bathroom the night of the attack, KHOU reports, and came out wearing a different shirt.

Goss is also being investigated by military authorities in connection with another sexual assault in North Carolina, the station reports.

Harris County investigators returned to the gas station, where the same attendant identified Goss as the man he saw in the store the night of the 2013 attack.

Records show Goss lived in the area where the attack happened, according to the Harris County Sheriff's Department.